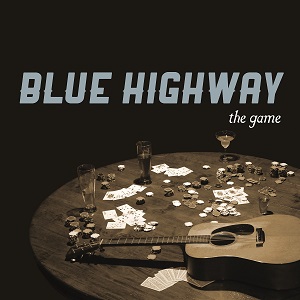 “The Game,” the title cut of Blue Highway’s new album, is the tale of a rollicking gambler, stylistically kin to songs like the venerable “Wild Bill Jones,” and other bad man ballads. It is rife with recklessness, immoral behavior, and gunplay. It is the kind of stuff that abounds in the earliest bluegrass, yet is a new original song. It was written by Blue Highway’s Shawn Lane and Alison Krauss’ bass player Barry Bales, and sung by Lane with all the fierceness in his wild tenor voice.

The Game, Blue Highway’s new album, marks their twentieth anniversary as a working bluegrass band, and the title cut illustrates several of the band’s strengths. The accompaniment comes from members of the band, all highly regarded instrumentalists; the vocal is performed by one of three excellent lead vocalists in the band, and the song, while original, harks back to the very roots of bluegrass, and highlights the band’s knack for respecting the history of the genre while remaining forward looking. Another Shawn Lane composition, “All The Things You Do,” co-written with Shannon Slaughter, was inspired by the recent untimely death of the great Harley Allen, although the lyric never alludes directly to Harley’s passing. Lane says that he had first begun thinking of a song along such lines upon the passing of bluegrass great Larry Rice. The lyrics deal with the universal sense of loss felt on such occasions.

A veteran of both Doyle Lawson’s and Ricky Skaggs’ bands, prized for his voice as well as his mandolin and fiddle virtuosity, Lane has been a key component of the Blue Highway sound, and has contributed many outstanding original songs to the band’s oeuvre. Two more examples of that are “Where Jasmine Grows,” a co-write with Gerald Ellenburg, and the melancholy “Just To Have a Job,” the latter an example of Lane’s feeling for the working man, a theme that permeates his best work.

During their twenty years together, Blue Highway has maintained an unusually high level of excellence in their music, consistently turning out bluegrass that’s characteristically true to the principles of the genre while remaining both memorable and original. Amazingly, the original personnel from the band (which formed in 1994) remains intact, a remarkable achievement in itself, given the frequent mixing and matching of personnel that is more the norm (banjo player Jason Burleson did leave for a short period early on, but soon returned to the band)