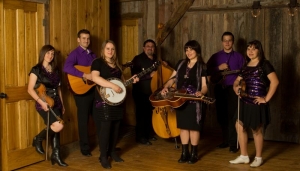 Today as yesterday, bluegrass music remains as down-to-earth and as relevant as ever in the hands and hearts of those who have the desire to come of age immersed in its mountain soul. Among today’s musicians, there is but a remnant talented enough to call forth and build upon the music’s family heritage.

The Martins are just such a family.

Banjo great Steve Dilling of IIIrd Tyme Out had this to say about the family, “The Martins may be young in years, but their music sounds like they have been together for many years beyond their age. If you like hard driving bluegrass, with a taste of originality, you will love the fresh sound of the Martin family band.”

Interest in this talented family has been growing during the past few years.

Affirming the musical legacy they carry forward, The Martins have begun to receive modest recognition including seven times voted SPBGMA Instrumental Group of the Year by Midwest fans, winners of the SPBGMA International Bluegrass Band Championship in Nashville, TN in 2007, and three of the family’s sisters were plucked temporarily for their inclusion in Bluegrass Bouquet – Daughters of Bluegrass (Blue Circle Records). Released in 2008, the all-star project was voted by industry peers to be IBMA Recorded Event of the Year in 2009. Including such well known talent as Sonya Isaacs, Sierra Hull, Dale Ann Bradley, Kristin Scott Benson and more, the Martin sister’s equal participation in such a nationally renowned project speaks to how well the group’s talent stacks up to some of the best in the bluegrass industry.

Born and raised where the prairie meets the Ozark hills in Morgan County, Missouri the family is now based in the ‘show me’ state’s capital Jefferson City. While becoming perennial favorites on the bluegrass circuit in the Midwest since 2001, they have entertained tens of thousands of guests at hundreds of events from California to the Carolinas, Minnesota to Texas, from Florida to Maine and many stops between drawing an increasing number of fans to their fold.

For an older generation of fan, they instill hope for the future of the music through their tradition honoring stage craft but, perhaps more importantly, a younger generation of fan through their dynamic concerts and willingness to be Bluegrass in the Schools presenters and knowledgable workshop clinicians that are dedicated to paying their dues forward. A witness not only to the bond they share among each other but the commitment to share their love of bluegrass music and family hospitality with their fans young and old. Simply put - they embody the best of bluegrass music’s family heritage.
27
What's This
Advertisement