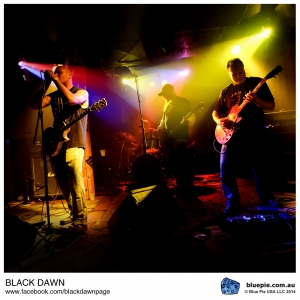 Born in the suburbs of Long Island, Black Dawn started as an alternative metal side project for guitarist Tom Kelly in 1992. Not to be confused with the Finnish death metal group of the same name, New York’s Black Dawn quickly grew into a full time project for its members, releasing a self-titled debut album in 1997 under the Long Island label Suicide Groove.

Since that time, Black Dawn has steadily worked to produce an intense, yet melodic metal sound while growing a significant following throughout Northeast United States. Drawing on an eclectic mix of heavy metal and hard rock influences, the Black Dawn sound is inspired by groups ranging from classic metal acts like Black Sabbath to 80’s thrash outfits like Pantera and Megadeath to alternative and progressive rock groups such as Tool and Alice in Chains, as well as everything in between.

Since the issue of their initial self-titled LP, Black Dawn has consistently put out high-quality, forceful songs with the release of their live CD "Live at CBGB's" in 1998 and two full-length CD's, "Absence of Time" in 1999 and "Age of Reason" in 2004. Selected tracks from all of these releases have been included in rotation on hundreds of various college and internet radio stations and podcasts worldwide. The band recently finished and released its fourth studio project, a five-song EP titled “Until We Meet” now available on iTunes. The first single from the EP "Upon Your Lips" is a potent, hard-hitting track reminiscent of some of the best of Godsmack or Disturbed, and it is currently available for free download on www.reverbnation.com/blackdawnband.

The four group members, Matt Kotten (vocals, guitar), James Lane (bass), Enzo DiPaolo (drums) and Tom Kelly (guitar) have all been together since the beginning, and this tight-knit familiarity with one another comes through in a dynamic harmony that is both crisp and powerful. Together, the quartet has performed in numerous shows, festivals, and competitions from coast to coast in venues such as Webster Hall, CBGB's, the Continental, and the Hard Rock Cafe in New York City, and has opened for acts such as Kings X, Daisy Berkowitz, LA Guns, and Biohazard.

Black Dawn continues to write new songs all the time. Despite a career spanning a near quarter century, there is still plenty of creative gas left in the tank, and if “Until We Meet” is any indication, it’s high octane.

To see more of Black Dawn you can check out the links below: