Blackberry Smoke - Holding All The Roses 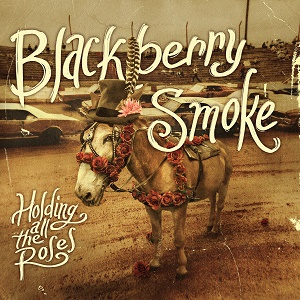 On February 10, 2015, Atlanta’s Blackberry Smoke will release Holding All The Roses, the band’s fourth studio album and its first Rounder release. "I think that this record does a really good job of conveying what we do and what we're about," says singer-guitarist-songwriter Charlie Starr.

Holding All the Roses compellingly captures the energy, attitude and honesty that have already helped to make Blackberry Smoke one of America's hottest live rock 'n' roll outfits, as well as a grass-roots phenomenon with a large and fiercely loyal fan base.

The 12-song set—produced by Brendan O'Brien, whose previous production clients have included AC/DC, Aerosmith, Pearl Jam, Bruce Springsteen and Neil Young—showcases the Atlanta-based quintet's emotion-charged mix of bluesy rock, gospel soul, and country, with Starr's raspy twang matched by his and Paul Jackson's snarling guitars, Brandon Still's hauntingly expressive organ and piano, and the propulsive sibling rhythm section of Richard and Brit Turner. The songs' musical and emotional appeal is further elevated by the band's three-part vocal harmonies and expanded arrangements that make judicious use of fiddle and added percussion.

Esquire gave fans a preview of the album with their premiere of “Rock and Roll Again.” Listen to the song here: http://bit.ly/1s8tF5F

The musical maturity that's on display throughout Holding All the Roses underlines Blackberry Smoke's steady evolution from rough-edged club act to arena-ready rock 'n' roll juggernaut. Since its formation in 2000, the band has never shied away from hard work, playing more than 250 shows a year and building an ever-expanding audience on the strength of its live shows, and with a noticeable lack of mainstream hype.