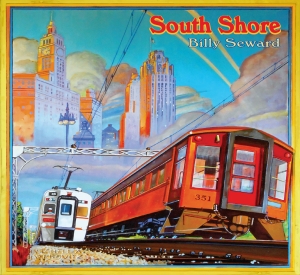 Billy Seward's musical identity is the tale of 2 cities. Beginning in Chicago, with the West Side Blues masters Otis Rush and Magic Sam being the original inspirational source, then heading due south a days ride to Memphis, where the pulsing driving rhythm's and horn counterpoints of Hi Record's section drove singers like O.V Wright, Otis Clay, Syl Johnson and of course Al Green to the highest of high's. From the moment Billy heard Otis Clay singing in a small Chicago North side club, he was hooked and followed that musical trail down to Memphis.

At a time when rock blues guitar seems to define what blues is to many, Billy brings his voice to the front with a rich blend of deep soul and big city blues, paired with the crisp clear bite of the West side drenched blues guitar, a combination that can both excite and soothe but will always satisfy.

Billy Seward is proud to announce the release of his second solo record South Shore. The city of Chicago was such a powerful muse for this album that he ultimately decided to record in the Windy City. In fact, he was fortunate enough to record at the great Delmark Records, one of the pioneer recording facilities of the city. The album is a projection of Billy’s own history in Chicago, both as a musician and fan of the idols he was fortunate to see on a regular basis.
The Session: Highly respected Chicago blues guitarist and producer Dave Specter heads up the project as producer. He gathered a talented supporting cast of players with the dynamic Brother John Kattke on keys, Otis Rush alumni Harlan Lee Terson on bass, and deep pocket groove master Marty Binder on drums. Legendary Chicago soul producer and baritone sax man Willie Henderson heads up the horns, with Doug Corcoran on trumpet and Steve Eisen on tenor sax. Special guest Jimmy Johnson, who has been a fundamental influence on Billy, can be heard playing guitar and trading verses on “Strange How I Miss You”, a song Jimmy recorded on his Delmark release “Johnson’s Whacks”.