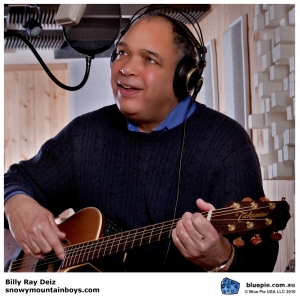 In 2011 Billy Ray Deiz released his album ‘The Nashville Tracks’, a 10-song collection that features some of the best musicians in the world playing Bill's original compositions ranging from Soulful, R&B, Country, Blues and Rock 'n Roll.

The whole album rolls along in a true Nashville/Blues style, and finishes with the happy/snappy conclusion of A Simple Life, which tells the age old story of escaping the rat-race and finding one's own inner peace, joy and tranquillity.

As a teenager, he taught himself guitar and began to play and sing Buddy Holly and Richie Valens songs. During college he explored a new direction as a folksinger, performing songs by Peter, Paul and Mary and the Kingston Trio. Bill also experienced the Rock 'n Roll lifestyle with several bands that led to what might have been his breakthrough. Billy Ray was a founding member of the legendary Seven Souls, one of L-A's hottest bands, that went on to open for James Brown and The Righteous Brothers in its heyday, and was the launching pad for Bob Welch who went from The Seven Souls to fame with Fleetwood Mac. The Vietnam War split up the original Seven Souls band, including Bill, who went on to serve his country as a member of the U-S Marine Corps Reserve, and later as a commissioned officer in the U-S Navy Reserve.

Bill has also been a TV and radio personality for much of his career, working in LA, San Francisco and his hometown of Portland, Oregon, USA. In Los Angeles, he created a very popular feature segment for KCBS TV news, which offered exclusive behind-the-scenes peeks into the music business. It was managing this segment that helped fuel Bill’s desire to make his own music He also claims the musical experiences of singing a duet with Neil Sedaka on Los Angeles TV, and joining Bob Dylan as a backup singer on a Leonard Cohen track.

For more information check out the links below
or search ‘Bill Deiz” on Google.