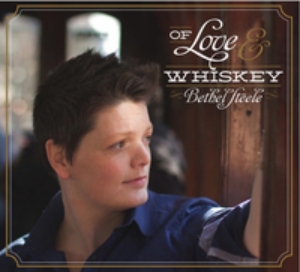 Bethel Steele, a singer#songwriter based out of Boston, MA, has released a second studio record, Of Love & Whiskey. This introspective and tender exploration of the human condition is a 10#song effort that delves into love’s adventures, the journey of
recovery and self reflection, and our capacity to find hope in unexpected places. The production on Of Love & Whiskey ranges from Bethel’s vocal and guitar "With
Age" to fully produced songs backed by seasoned performers "Sunrise, The Farm, Blue Skies", but every song on the album shares an intimate story with the listener. Even the edgiernumbers, like those that tackle the subject of addiction "Hard Love, Whiskey", have a certain heartfelt conviction and sincerity about them.
The record as a whole is a journey, beginning with BASE, a suspenseful, open-ended song about a thrill-seeking adventurer with Greg Greenway on piano", and closing with the uplifting gospel inspired Blue Skies. The record dives into Steele’s own struggle with
the duality of gender in Beautiful Boy. Inspired by the realization that many people do not subscribe to society’s gender roles, Bethel wrote the song as a self addressed love letter:
“You’ve opened up a can of worms boy, and I don’t want to be ashamed. But now you’ve shown your pretty face and I won’t be the same.” The song’s message of acceptance and oneness resonates with a wide audience of listeners, especially those who feel that they don’t quite fit in.
The jazz influenced Sunrise, speaks to the joys of newfound love: “Let’s live in this moment and take love as it comes, for weeks or a lifetime, or until the sun rises.” The song articulates the special feeling that is experienced at the beginning of a relationship and the desire to hold on to that for as long as possible. Of Love & Whiskey’s other love songs are lightly instrumented, creating an intimate duet between guitar and strings on Seasons and guitar
and organ on Gentle Babe.
The Farm, a song that considers the confluence of the past and present, tells of an old farmhouse and the family that lives there. The preceding song, With Age, is a sympathetic first person narrative from the perspective of someone who has experienced the
aging process and has gathered wisdom over a lifetime of adversity.
The final song on the record, and perhaps the one song that has the broadest appeal is Blue Skies. This hopeful song calls out, “Goodbye to the doubt that once filled my mind for blue skies, there’s hope for another day… with blue skies,” ending the adventure which is Of Love & Whiskey on a high note.
PRODUCEDAND MIXEDby Jagoda and Neale Eckstein at Fox Run Studios,
Sudbury, MA
Bethel Steele
The singer!songwriter movement started in the early 1970s. Bynow, it can be called a tradition, and with Bethel Steele, it is in good hands.
MASTERED by Jonathan
Wyner Works, Cambridge, MA
FEATURING PERFORMANCES BY Greg Greenway (Brother
Sun) on piano "BASE", Tom Prasada Rao on strings
"Seasons", Denis Dufresne !Pear Band" on mandolin and
fiddle "Beautiful Boy, The Farm" and Rich Feridun Amy
Speace, Jimmy LaFave" on electric guitar Beautiful Boy,
Sunrise, Hard Love, Whiskey, Blue Skies".
0
What's This
Advertisement