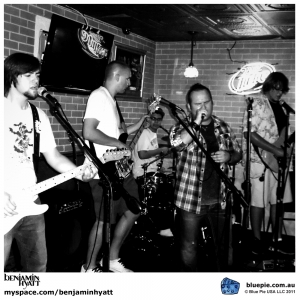 May 2012: Benjamin Hyatt releases his new hit single “The Way You Move”.

Benjamin Hyatt, a native from the country music capital of the world Nashville, Tennessee has become one of the fastest rising stars in the pop rock/contemporary scene. His new single “The Way You Move” has been released on to the sound waves. The song has a great rhythm and tune that you cannot help but hum along and perhaps get your feet tapping. The smooth, raspy voice that sings along creates a unique sound. Although on the rock scene, the song is very sweet; with lyrics such as ‘I love the way you move’ and ‘don’t ever leave me alone’.
Working hard, the song has travelled and hit the radio waves; particularly in Tucson, Arizona. With a wide array of musical influences, Benjamin Hyatt and his band sound similar to the sounds of Coldplay, Maroon 5, Matchbox 20, GooGoo Dolls, Hootie and the Blowfish and Boys II Men. With a band filled with musical talents on a wide range of instruments, why wouldn’t you want to check out their sweet beats and rocker attitude? Blue Pie Records is proud to have Hyatt as one of their artists with this new song.

Benjamin Hyatt grew up in a family that was constantly on the move. This did not stop Hyatt’s music from following; it has been with him every step of the way. Growing up he was the lead singer/songwriter for two bands, however eventually moving on to "more stable work". He never gave up on his passion for music and one night it paid off at a local Karaoke spot in Arizona. A producer from Nashville told him he should record and that's just what he did. This is where Hyatt’s success skyrocketed.

Don’t miss out on checking out his new single!
You can find Benjamin Hyatt on:


< Go Back
1
What's This
Advertisement