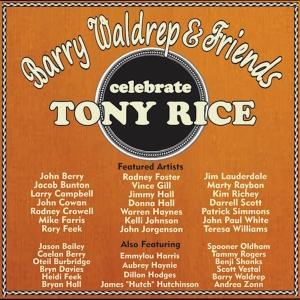 Tony Rice was more than an influential guitar player to me. He moved me emotionally with everything he played. It all came from the heart through his fingers on to the strings of the guitar. But not only did he influence guitars players, he inspired so many singer songwriters in many different genres with a voice that was unmistakably Tony Rice.

I’ve been listening to Tony’s records for years and I’ve had several opportunities to talk with him. But there was one long conversation in January 2011 on a five hour car ride with just the two of us to a show, that really told me a lot about what inspired him as a musician. He also invited me to sit in and play that night, and I am thankful that someone in the audience captured it on video. It is a treasure to me. To play with your guitar hero and have him look over with a smile during your solos was a great feeling. I felt like I got his stamp of approval.

The making of this album actually started seven years ago when I was asked to participate in a project to benefit Tony. We went into the studio and cut our song, but the album was never completed.

In February 2021, my good friend and manager Brian Smith (Leadership Artist) called me and suggested we release the song we had recorded seven years ago as a single in tribute to Tony. I thought that was a great idea. It was me, John Cowan, Oteil Burbridge and Benji Shanks that cut the song. As I listened over and over, I started thinking about the long conversation I had with Tony back in 2011 and what he said to me after we played together that night. He said it’s great to hear you playing it your way. So I called Brian Smith and told him I thought we should do an album instead of one song. An album with featured artists outside the bluegrass community who were inspired and influenced by Tony.

I grew up playing bluegrass with my fathers band and then moved to other styles, but bluegrass has always been with me and will always remain with me. But, I also believe that having new branches that grow from the roots of bluegrass will expand the love for this great music.

Music knows no boundaries and Tony created so many great examples of that. When you cross the line of other genres, that’s when you expand the audience and turn people on to other styles that they would not normally be interested in.

The intent of this album and the artists involved is to show what a powerhouse master Tony Rice was at bringing musicians and fans together from different genres.

As Brian and I started assembling all the artists, it just kept getting bigger. All these major artists we so excited to get on board with this project. Artists from Classic & Southern Rock Royalty to Heavy Metal, Americana, Country & Roots Gospel. All of these artists knew the music of Tony Rice very well. Also included are some of the greatest musicians and harmony singers in the business that were influenced by Tony as well.

The songs were chosen to fit each artist from the different musical situations Tony was involved with, like The Rice Brothers, Peter Rowan, David Grisman Quintet and albums like Cold on the Shoulder, Skaggs & Rice, Church Street Blues, Tony sings Gordon Lightfoot and many others.

The magic that has occurred during the recording of this album is unbelievable. It is positive in every aspect and I am thrilled to produce an album of 21 featured artists and many great musicians who have shown such love for Tony Rice and his artistry.