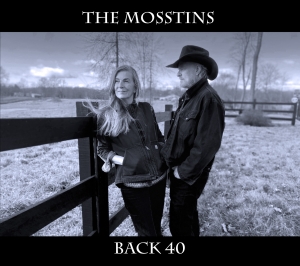 The Mosstins’ “Back Forty” is the latest album from Catskill Mountain born and raised, Ency Austin and her West Virginian bred husband, Marc Moss.
Marc Moss, former guitarist, vocalist and co-songwriter with the much beloved "Angel Band"has formed this duo with fiddler, vocalist and wife, Ency Austin.
From Ollabelle Reed and Sippy Wallace to Vince Gill and everyone else in between, “Back Forty” contains new renditions of some of the most beloved songs ever penned.

BIO:
Marc Moss was born and raised in Morgantown, West Virginia. He began playing music when he was 7 years old, inspired by seeing the Beatles on Ed Sullivan.

Long time singer/songwriter, he was the multi-instrumentalist and songwriter in the popular Americana group “Angel Band”. Marc toured the US with David Bromberg, recording and mixing Bromberg’s album “Use Me”. He worked closely with the late and great, Levon Helm, Los Lobos, Vince Gill, Linda Ronstadt, Dr. John to name a few.
Also check out "Moss Meredith" album, "Late for the Moon" here on APD for the newest release from Marc Moss and Dave Meredith. A collaboration of originals from these two great singer/songwriters.

Ency Austin was born in Catskill, NY and has been singing (while doing the dishes) since she was seven years old. She LOVES her fiddle almost as much as she loves Marc. She was also the manager of “Angel Band” guiding them thru 3 great album releases and is a producer of many concerts through her well known NYS venue “Studio Red Hook”.

This is her second recording using her talents as a singer, multi-instrumentalist on fiddle, guitar and jug, and up until then… was the girl who always wanted to sing while sitting backstage watching others.