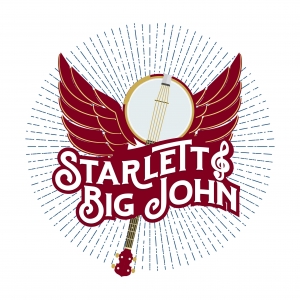 That happened because of the legendary father of bluegrass, Bill Monroe, who invited the teen guitarist to take to the Opry stage.

“I was the youngest to ever have won that male vocalist category in the state of Virginia,” Big John reminisced. “He heard that and said, I wanna hear him.”

It seems he liked what he heard!

Since then, he’s performed with various outfits, including New Dominion Bluegrass. His resume includes appearances with Monroe and The Bluegrass Boys, Jackie Phelps (Hee Haw), Tater Tate and Jodi Rainwater, and more. Talley fits it all in between work at a government job and being a husband to wife, Stephanie, and father to a six-year-old and a four-year-old.

As for his bandmate, Starlett started as a young ‘un as well. She was about four years old the first time she won a singing contest.

fifty percent of the new duo. She’s also the wife of 16 years to husband Josh, and parent of a six-year-old and a three-year-old. She lives not far from where she was born and raised in Cascade, Virginia.

Starlett and Big John are currently in the process of promoting their first CD, “Till the End of the Road.” The 12-track album includes a mix of originals penned by the duo and by experienced songwriters Keith Driver and Barry Rogers. It also includes Starlett and Big John renditions of older tunes by Earl Taylor, Bill Monroe, and more. Joining the duo in the studio were Jonathan Dillion (mandolin), David Carroll (banjo), and multi-instrumentalist and IBMA “Player of the Year” award-winner for both fiddle and banjo, Ron Stewart, who will deliver the fiddle for this release.

The passion of this great pairing is summed up nicely when Starlett explains what she loves about bluegrass.

“The sound, the songs, the lyrics, the drive, the artists, the heartfelt meaning in each line, and how the bluegrass world is like one big family,” she said.
https://thebluegrassstandard.com/starlett-and-big-john-bring-their-perfect-fit-musicianship-to-a-new-record/

< Go Back
26
What's This
Advertisement