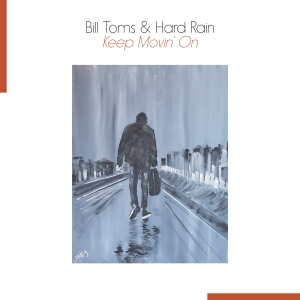 "I Keep Moving On”
Man’s Soul is On Trial

A pandemic and isolation will make creative people either melt or thrive. Bill Toms and Hard Rain did the latter. Maybe a little desperation as well. “Man’s Soul Is On Trial” is the first single (release date October 23), from the album “Keep Moving On”, which is scheduled to be released on April 9, 2021. “Man’s Soul” is certainly on trial. The song captures the mood of society today, but generates hope that a more compassionate world will emerge. Because we have the choice of what door will be opened.

“Bill Toms is a poet, a soul-shouter and guitar slinger with one foot in the gutter and an eye on the heavens above. And man, does he front a great rock n' soul band!” - Will Kimbrough (Nashville)

While it’s hard to put a finger on any one sound that defines “American music,” the compositions of Bill Toms are as close a template as any. The Pittsburgh native, along with his band Hard Rain, delivers a sound that takes the greatest of America’s most beloved genres and melds them into a poetic representation of the best the country has to offer.