The Grassifieds - What We Are 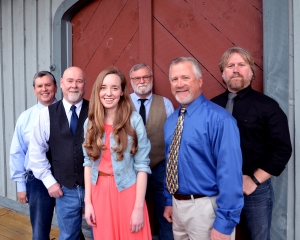 "What We Are" - Released August 1, 2020
Production Credits:
Recorded at Blue Sound Underground (Joel Barnett)
Mixed and Mastered at Métier Mastering (Will Shenk)
Produced by Joel Barnett

Biography (Summary)
The Grassifieds are a traditional bluegrass band founded in 2006 and based in Walkertown, NC. The current band lineup consists of:


Biography (Full)
The Grassifieds are a traditional bluegrass band based in Walkertown, NC.

The Grassifieds began with what Jim Grubbs (mandolin) calls his "surgical instrument." Having played guitar since age 10, and having written songs from his teens, Jim had developed a love of the mandolin but had never owned one. Then, at the age of 41, he was forced to endure a tonsillectomy. Jim purchased a mandolin just prior to the procedure in anticipation of the time away from his demanding career as a director of engineering for a major automotive electronics manufacturer. Whenever he was awake and in pain, Jim picked up the mandolin and spent hours learning to play it as a distraction. A short time later, Jim invited a group of friends to his house to pick together – including brothers Joel (formerly of touring rock band "Typsy Gypsy") and Greg Barnett. Jim says, “We all loved the music from way back. So, we stuck with it every week. It became the most anticipated night of our week - four hours of pure sore-fingered joy!” Six months later, The Grassifieds opened for The Embers in a “Mountains to Sea” show for 400 people at Ft. Hamby Amphitheater in North Wilkesboro, NC.

After some personnel changes as livelihoods dictated, in 2008 The Grassifieds added Jerry Martin and Pete Wright from the local band String Fever. Pete and Jerry have performed together for over 35 years and bring many vocal and instrumental options to the band. Pete is an award-winning bass player and baritone singer, and he sings the occasional lead vocal. Jerry provides Scruggs-style fingerpicking guitar and rotates with Joel Barnett on banjo, enabling Joel to play lead guitar when needed. Jerry also sings most of the highest tenor harmonies and some lead vocals.

After several years without a fiddler, in 2012 The Grassifieds were blessed with the arrival of Amanda Hinds (née Smelser), a young classically trained violinist and PhD student in biochemistry at Wake Forest University. Amanda (now Dr.) Hinds brings the band up to what Jim calls “full strength” again: “With the fiddle, we’ve got a much broader set list. It’s just tough to feel complete without either a fiddle or a Dobro – or both!”

Greg Barnett continues to shine as the lead vocalist, often pairing with brother Joel for classic “brother harmony”. Jim Grubbs adds bass vocals to the quartets, and Amanda occasionally sings one for the crowd, as do Jerry and Pete. Says Jim: “We’re really blessed that every member of the band can sing. Most of the time, of course, we’re going to put Greg out front; he’s one of my favorite bluegrass singers anywhere. But it’s really nice that – largely from singing in church – we are all able and willing to pitch in and we can give Greg a break or two in every show, or provide varied combinations of harmonies behind him."

Songwriting inspiration has been relatively easy to find for The Grassifieds. Jim grew up on a small family farm in Alabama, and often writes the stories handed down to him by his father, who also taught him to play guitar at age 10. Says Jim: “Dad worked extremely hard to survive the Great Depression. He did whatever would pay to feed his family. He worked a few years in a coal mine, fixed cars, delivered ice (for ice boxes) – you name it! But Dad saw that farmers were the only ones around him that were never hungry, and he was hungry a LOT as a kid. So as soon as he could he bought a farm and never did anything else. That little farm fed six kids.” Greg and Joel Barnett are nephews of bluegrass pioneers The Church Brothers from Wilkes County, NC. The influence of The Church Brothers runs deep within them and can be especially prominent in Greg’s songs.

Since that first live performance in 2006, The Grassifieds have remained a regional favorite for enthusiastic live shows. They were thrilled to open for Darin and Brooke Aldridge in 2012, to provide multiple performances as a part of MerleFest in 2014 and 2015, appear in the Stokes Stomp in 2017, and to open for The Becky Buller Band in 2019 - along with numerous appearances at smaller venues. Recording projects were delayed by demanding “day jobs” held by all band members, and for a time by the birth of Mandy Hinds (Amanda’s daughter) in 2019. Finally, with the impact of COVID-19 halting live performances, The Grassifieds retreated to the studio and focused on their debut CD “What We Are” (released August 1, 2020). This project includes four of the band’s original songs. Filling out the album are seven of the band’s favorite covers, demonstrating the wide range of style that is possible within the traditional bluegrass sound to which The Grassifieds remain true.