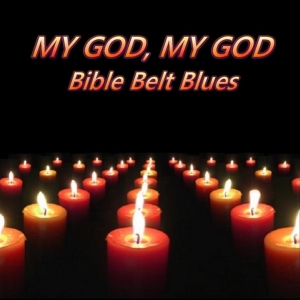 
ABOUT THE ALBUM: (Feature Article)

"Sermon In A Song: The Bible Belt Blues Story"
by Paula Vega Vondenstein

(June 2019) With the release of Bible Belt Blues’ second album in five months’ time, husband and wife musical team, Harold and Paula Vega Vondenstein, attempt to do the near impossible: to craft an album that could literally change the direction of Christian music as we know it today. Released on June 1, 2019, “My God, My God,” is destined to become a game changer in the field of Christian music with its full-fledged repentance songs including special effects that can cross over genres, actual invitation prayer songs with belting vocals, and deep theological truths captured into songs where the listener actually gets it, memorizes it, owns it, and lives it.

Bible Belt Blues’ music is both fresh and original with its musical roots distinctly early Mississippi Bentonia blues with a bit of 70’s retro mixed in for good measure. After intensive study of the history of Mississippi’s blues for over two years, Bible Belt Blues was officially created September of 2018 when Paula convinced her musician husband, Harold, to let her craft the lyrics first. Disturbed over a growing number of Christian songs where the lyrics lack depth and where the music is overpowering the lyrics, Paula was eager to make her mark in the field of Christian music while simultaneously making an eternal difference for the Kingdom of God.

Paula crafts the lyrics first which sets the tonality and structure for each song making each one a musical work of art, yet remaining true to their own distinct genre, Bible Belt Blues, which falls under the sub-genre of Gospel Blues. Being led by the Holy Spirit of God, her husband, Harold, crafts the music around the lyrics adding numerous tracks on a looper, creating the illusion of a band which includes his vocals, guitar, “weeping” harmonica, drums, and special effects.

“God has given each of us our own distinct gifts which work together beautifully when crafting songs,” remarks Harold. “We literally craft the songs together, I do the vocals, guitar, harmonica, and everything tech which includes mixing, mastering, and building our website and YouTube Channel: Bible Belt Blues. Paula is the lyricist for all of our songs, my vocal coach, our music producer, mixing editor, and does everything in regards to graphic design, marketing, media, and securing radio airplay. Paula is naturally very outgoing and will talk to anyone. Give her an mp3 boom box and some business cards, and she is a walking talking billboard for our music. I am a bit more reserved. I prayed to God to give me boldness, and He gave me Paula.”

Another pivotal door opened up for Bible Belt Blues on June 4, 2019 when they secured the finalist nomination for the 2019 Josie Music Awards as Duo/Band for the Gospel/ Christian/ Inspirational music genre after 23,000+ nominations were submitted across all genres. A 2nd tier finalist nomination came through on June 19th for Bible Belt Blues for Gospel/ Christian/ Inspirational Entertainer of the Year! After calming down from receiving two nominations that only seemed to be a distant dream, Paula and Harold are quick to give glory to God, “Only God could have opened that door for us. Harold and I are both humbled and honored.” Looking forward to that big day on September 21, 2019 for the Fifth Annual Josie Music Awards at the Dollywood Theatre in Pigeon Forge, Tennessee, Paula and Harold stay confident in securing that coveted award. Meanwhile Bible Belt Blues is focusing on securing bookings for their music at local churches, colleges, schools, and for special events.

Paula and Harold Vega Vondenstein take their calling as Christian musicians seriously, believing that a song can soften a hardened heart to be receptive to the gospel of salvation through Jesus Christ. It is their heartfelt desire to be used by God in a mighty way and believe that creating Christian songs with bold, biblically sound lyrics can do just that. According to Paula Vega Vondenstein, “It’s the lyrics that make a song Christian; the bolder, the better. Soft and fluffy lyrics do not win souls for Christ.” (BibleBeltBlues.com) https://biblebeltblues.hearnow.com/

All glory and honor goes to our Lord and Savior, Jesus Christ.

Fasten your seat belts as Bible Belt Blues' high energy, BB King blues style song, "Are You Ready?" transports you to a much higher level of expectation where supernatural miracles are within the realm of possibility. Take your faith to a much higher level as you dive in deep to experience its jolting lyrics and belting vocals. Prepare your heart and mind to witness a shaking that this world has never known..!!

Imagine what it would have been like to be one of Jesus’ followers who were gathered together in one accord, after His ascension into Heaven, awaiting the descent of the Holy Spirit at Pentecost! With lyrics and vocals portraying hearts that are humbled, prayerful, and fully repentant, Bible Belt Blues recreates a place of holy reverence for the Holy Spirit to feel welcome in their new song, “Holy Revival.” Close your eyes as you fully experience the violent rushing wind (at the end of the song) as the Holy Spirit is depicted in Acts 2:2.

With its captivating rhythmic beat and its unbridled vocals overflowing with reverence, love, and gratitude to God, “My God, My God,” by Bible Belt Blues is the quintessential worship song. With its soft blues undertones and a style appealing to multiple music genres, “My God, My God” was created to capture the essence of the heart of worship. “A Testimony in a Song..!!

"If You Only Knew” by Bible Belt Blues explores the extravagant and unapologetic depth of love and gratitude to one’s Lord and Savior, Jesus Christ, Who has forgiven them so much and saved them for His very own. This song captivates its listener with its smooth rhythmic blues music and its reassuring message that we serve a God of second chances Who is ready to forgive us even our most grievous sins.

With the song, “Down the Rabbit Hole,” Bible Belt Blues is attempting to do the unthinkable: to craft a full-fledged repentance song with a captivating slow blues beat, special effects, and dynamic vocals that totally envelop its listener, allowing them to experience a truly repentant heart, which is an integral part of the Salvation process.

It’s easy to justify our sin, especially when no one is looking. As Christians we are called to be holy and to walk away from sin. Bible Belt Blues’ new song release, “I Know It’s Easy” is written in conversation style between two friends where one is sharing the details of his or her sin, while the other is standing firm that sin is still sin, regardless of whether or not anyone sees it. A real eye-opener of a song with belting lyrics wrapped in 70’s retro style blues.

Bible Belt Blues’ powerful invitation song, “The Only Way to Heaven,” dives in deep to tackle the false belief system that we can somehow earn our way into Heaven by doing enough good works. With bold, yet compassionate lyrics, its weeping harmonica, and heart-wrenching vocals, the Truth about Salvation through Jesus Christ is laid bare for all who have ears to hear.

Unfortunately, many people live their lives focused on worldly gain without giving much thought to God and to their eternity. With its weeping harmonica and jolting lyrics based upon the Parable of the Rich Fool, “Fool, Did You Not Know?” by Bible Belt Blues is a wake-up call to anyone who lives their life without God. Today is the day of Salvation..!! Don’t' delay..!!

All Christians are members of the Body of Christ, but each with their own special gifts to contribute. With its upbeat Bentonia blues resembling the sound of a marching band, “We Are the Body of Christ” by Bible Belt Blues will challenge its listener to discover their own spiritual gifts and find an area where they can serve.

Guaranteed to grab your attention with its jolting lyrics, foreboding music, and special vocal effects, “Teach Me To Number My Days, Lord” by Bible Belt Blues is the ultimate “wake-up call” song. Life has a way of sneaking up on those who live their lives focused on pleasure and the temporal things of this world. “Teach Me To Number My Days, Lord” challenges its listeners to live their lives daily fully surrendered to Christ with an eternity mindset.

It is easy to trust God when everything is going well in life; It is often times difficult to trust God when our world comes crumbling down. With its compassionate lyrics, slow rhythmic blues, and weeping harmonica, “Trust God” by Bible Belt Blues will envelop you as you learn to trust God during very difficult life situations. A powerful song of healing and restoration.

Imagine what it would have been like to be one of Jesus’ followers who were gathered together in one accord, after His ascension into Heaven, awaiting the descent of the Holy Spirit at Pentecost! With lyrics and vocals portraying hearts that are humbled, prayerful, and fully repentant, Bible Belt Blues recreates a place of holy reverence for the Holy Spirit to feel welcome in their new song, “Holy Revival.” Close your eyes as you fully experience the violent rushing wind (at the end of the song) as the Holy Spirit is depicted in Acts 2:2.

"How Our Journey Began"
by Paula Vega Vondenstein
(March 2019) Harold and Paula officially met on Christmas Day of 2014 when Harold responded to Paula’s online profile on Christian Mingle. Paula knew exactly what she was looking for and wrote a very tight profile asking for a Christian musician and someone who would not set limits on what God could accomplish through him. Harold responded and the rest is history.

During the past four years which included a whirlwind romance and a quaint church wedding 10 months later, Paula and Harold set out to create their Gateway To Glory YouTube Channel which houses Paula’s bible verse narrations set to motion video along with Harold’s music he had created and recorded before they met and married. Harold also created a YouTube Channel: My Daily Walk in Deliverance.

But nothing could compare with the magnitude of the journey that God now has them on with the creation of their very own music genre, Bible Belt Blues, with original Bentonia blues influenced music with bold, biblically sound lyrics, like nothing Paula had ever heard before in church or on Christian radio. Repentance songs, Invitation songs, Prayer songs, Closing songs, and Church Revival songs. All with the hauntingly beautiful D and E minor chords and gritty guitar picking sounds of the early Mississippi Bentonia blues style.

Some songs even include harmonica solos. In “The Glory Belongs To You, Lord” Harold made the harmonica cry. All are recorded in the 444 Hz healing frequency (the key of David.)

Embark with us on our journey as you immerse yourself in our very first album, “I’m Not Ashamed To Be A Christian.” We pray that our music touches your heart and stirs your soul to the things of God and that you come back wanting more. Our second album is scheduled to be released on June 1, 2019. All glory and honor goes to our Lord and Savior, Jesus Christ.