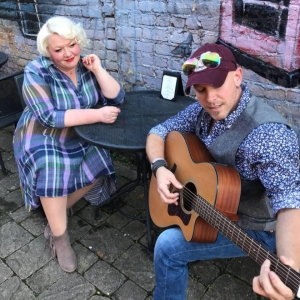 Andersen and Jobe, who are both Dollywood performers, invited their family and friends to an album release party Thursday at Dollywood's DreamMore Resort. At the event, they spoke to media and performed music from their album, titled "Long Way Home."

Parton couldn't attend the event but recorded a video message showing her support for the duo.

"I am so excited as I know all of you are to be celebrating today with Jada Star and Barry J and their 'Long Way Home' album release," said Parton. "I think it's great. I wish I could be there. I tried my best to get to be there, but I couldn't make it, but I know you're going to have fun, and I know it's going to be a great album. I've got to hear most of the things I believe, and I think it's absolutely wonderful so I just wanted to say 'Jada Star and Barry J, congratulations.'"

"An unconventional album process"
Andersen and Jobe met while performing together at Dollywood's "My People, My Music" show a few years ago and became friends.

As time passed, the two began to perform music together outside of the show including a song Jobe wrote to help those affected by the 2016 Gatlinburg wildfires, called "Mountain Strong."

Some of Andersen's family members encouraged her and Jobe to write down their music and pitch it in Nashville. They began working with Soundbiscuit Productions, who suggested they make an album themselves.

It wasn't what they had planned, but they decided to go for it, according to Andersen and Jobe. They wrote new music for the album and also included songs both of them had written earlier in life.

Jobe and Andersen describe their sound as artsy country. They debuted some of their music at the event, and it also featured some pop and rock sounds, too.

"Inspired by Dolly Parton and each other"
Andersen and Jobe's friendship gives them a chemistry that was evident in their performance on Thursday. Their voices melded together well as they sang harmonies throughout the concert.

Andersen said Jobe is like her sibling, and they often laugh and cry together. Jobe said they relate to each other so well because they're both songwriters.


"Honestly I think at least for me, I think songwriters are a different breed of people in general. We're very tied emotionally to our songs and ... just the way that we feel about things in general and being very honest and being very open as a songwriter, as songwriters and even going to Nashville, in general, it's just a different a feel. You're just kind of open a book and say 'Here's me. Love me or leave me,'" said Jobe.

Andersen's connection to Dolly and Freida Parton also inspired her to write songs and use them as a way to express her emotions.

"Well (Dolly Parton's) such an amazing songwriter and kind of writes everything she feels and thinks ... I mean my mother Frieda is the same way," said Andersen. "My mom's a songwriter, and I grew up with someone who was always writing and feeling and putting it out on paper and teaching me how to play guitar, and she was so influential in that, and she was so influenced by her big sister, so it just sort of was like this little step ladder situation.

"I'm just lucky to be dropped in this family, that it happened. I don't know how it did, but it did, and I'm very fortunate. If anything, it just made me feel comfortable. Stuff that I couldn't say out loud to people. It made me feel like I could do it that way, just writing it out and then singing it just made it a little easier."