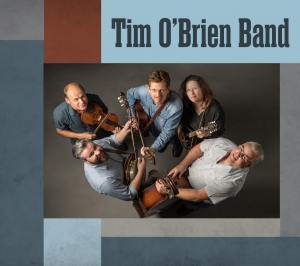 After many years navigating the outskirts of bluegrass and acoustic music, Tim OBrien’s dusky, unmistakable vocal timbre and instrumental stylings have this time landed with two feet squarely back in bluegrass.

His latest release Tim OBrien Band is the coming together of a group of musicians perfectly aligned in intention and ability. Purposefully hack, the title is a nod to the nuts and bolts of trad bluegrass, and the singular energy a band such as this can conjure. Well known instrumentalists Mike Bub (bass), Shad Cobb (fiddle) and Patrick Sauber (banjo/guitar) bring the same team effort to the studio that O’Brien fans know from recent live performances, forging Tims song choice and delivery into something fluid and breathing. ‘This crew has the potential to make ten more records together and never reach the limit of the possibilities’. Particularly noteworthy are the harmony vocals of Jan Fabricius. ‘We've sung together informally since she became my partner seven years ago, and she's always had a real natural way with the harmony, kinda pasting her sound onto mine’. Her distinctly folky voice is serendipitously matched with Tims, and consonant with his arrival at the bluegrass world from the side of a folk musician. She sings lead on The Other Woman.

Tim OBrien Band is also a return to where it all started for Tim - as a guitarist. As audiences can attest, Tim’s elastic yet menacingly groovy guitar playing is as pivotal to his sound as his mandolin playing. ‘Something about lead singer and guitar player makes so much sense’ says Tim. With his 1937 Martin OO-18, Tim O’Brien Band marks a return to the place that Jimmy Martin, Lester Flatt and Carter Stanley held at the helm of their bands. Tim’s mandolin and fiddle cravings are satisfied on select tracks, through occasional overdubbing, and with the help of special guest guitarist and Hot Rize cohort Bryan Sutton on two numbers.

At its core Tim OBrien Band is a bluegrass record, yet still manages to tap into the roving folklorist nature that Tim is known for. His ability to gather and interpret song is not exempt here. Of the five originals on the record, Dan Auerbach, Shawn Camp, and Jan Fabricius get co-write credits, crafting an assemblage of songs broad in their scope, refined yet playful in their execution. O’Brien also mines songs by old friends and heroes J.D. Hutchison (Drunkard’s Walk), Norman Blake (Last Train From Poor Valley), Dirk Powell (My Love Lies In the Ground), and Utah folklorist Hal Cannon (Wind) who also pointed O’Brien to the cowboy ballad Doney Gal. Reels from Irish fiddlers Kevin Burke and Mairéad Ní Mhaonaigh become American hoedowns (Hop Down Reel/ Johnny Doherty's Reel) in this group’s hands.

The opener Diggin My Potatoes is a buoyant blues turned bluegrass learned from Big Bill Broonzy, a Chicago musician from the 1940’s and a favorite of Tim’s. It’s a telling jump-off for the album, establishing the fusion at its core as the band lays heavy on the blue 3rd while Bub’s dog-house bass digs the groove deep in the ground.

As real then as it is now, Pastures of Plenty is Woody Guthrie ‘standing up for the migrant workers in the 1940's’. Tim’s minor key version has an darker urgency to it, with driving breaks from the guitar and fiddle. ‘Singing his [Woody’s] words can't hurt in these times, as the same story continues in the USA’.

The instrumental La Gringa Renee, a mandolin led homage to Jan (Renee her middle name) ‘emerged from the wind under the palm trees on Soliman Bay, in the Yucatán Peninsula’. It’s Bolero meets Klezmer, the melody quickening then settling, opening then folding.

Wind, written by Salt Lake City musician and folklorist Hal Cannon, is a rumination on the capricious, yet compelling force that shadows us through life. Harmonically varied and rhythmically crooked, it’s reminiscent of The High Road, an O’Brien classic that’s become a staple in contemporary bluegrass circles.

Beyond, co-written with Shawn Camp, is ‘about the unknown and its potential; a gospel version of the Western music classic ‘Ghost Riders in the Sky’. While tapping into the Bluegrass tradition of sacred music, it adheres to the Hot Rize maxim of "guilt free gospel" (all of the message and none of the mess).

Tim O’Brien Band is a return to bluegrass, but also a continuation of the Crooked Road that Tim sings about on the final track. It’s new, but familiar in the same way that we have watched his career wind from port to port. ‘I walk a crooked road, it leads me to tomorrow / through all my joy and sorrow I walk a crooked road’.