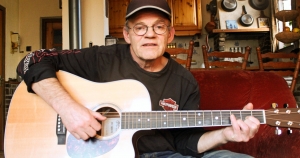 Born in 1953 Piet started making music (his first love) from his childhood up. When he was 15, he wrote his first songs and he went on writing better and better, resulting in recording a single in 1977 at EMI. Meanwhile he was a singer/guitar player in several cover-bands but in 1987 he was tired of making music and it was time to do his second love; working on a farm.
For twenty years he spent his time with driving tractors, milking cows and all the other hard work as a hand.
But blood is thicker than water and like many other musicians at that age, he got a mind to make music again.
Earned enough money for living for the rest of his life, he made himself familiar with digital recording with endless possibilities, wrote new songs and in 2012 he had enough stuff to release his album "Footprints In The Sand", which was only released regional.
And he went on and on, writing new songs and recording and in 2015 he finished his second album "The Fair Story".
It's the fair story about power, religion, indoctrination, oppression, exploitation, the human race, overpopulation, people, death and believe in god.
In 2016 he worked on a remix of his album "Footprints In The Sand", as he was unhappy with the sound of the 2012 version and brought it to the world in the Fall of 2016. This album is about his life, starting on how he returned to music after a twenty years intermission. Then it's about some events in his life losing some beloved friends but also about nature and how he's thinking about life and death. Futher on, on this 16 track album, it sounds like a parting, but he hopes it's not!

In 2016 Piet was contacted by a certain Omar Jallow, a young boy from Gambia, who asked for attention for his poor situation.
Although nothing appeared to be that this person really existed and he was probably a deceiver, who wanted to take advantage of the misery of others and therefore Piet broke off the contact after some time, his story was so realistic that it called Piet's attention to the misery in which many people find themselves in the third world countries.
In recent years, Western countries in Europe, North America and Australia have been confronted with large numbers of migrants who, for various reasons, often risked their lives out of pure despair to get out of their native country, plagued by war and natural disasters, which often have a direct or indirect link to climate change in large parts of the world, as a result of global warming, most caused by the economies and ways of life in Western countries.
In 2019 Piet's 3rd album 'OMAR' has been released, which is completely dedicated to these issues.
The lyrics of the smooth acoustic folksongs on this album are intended to make the listeners aware of things that have to do with this, such as the difficult integration of strangers due to cultural differences, the influence of the internet, the fortune seekers, the shocking increase of the world population with about 200,000 people a day and the role played by the big players on the world stage in all of this.