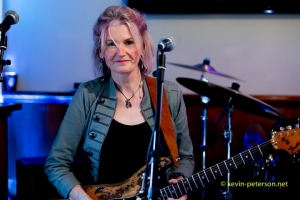 CHRISTINA CROFTS – Just How Love Feels
It’s been just over two years since singer, songwriter and guitarist Christina Crofts released her EP, Like We Used To. The genesis of her all-original blues-rock new album, Just How Love Feels, stretches back another year, to 2016, sadly a pivotal year for Christina – in August that year, her husband and mentor, guitarist Steve Crofts passed away.

As you can imagine, though Steve had been ill for a very long time, his passing was devastating, but her music and his unstinting faith in her talent got Christina through the toughest time any of us can face, and the beds for nine songs were duly recorded with bass player Stan Mobbs and drummer Tony Boyd. Fast forward and six of those original tracks made it to Just How Love Feels, with three new tracks recorded with Rossco Clark taking up the drum sticks, while Christina herself took up the bass for Voodoo Queen and the album’s title track, recorded in late June this year.

With a little time to sit back and remember the good times a little more clearly, Christina has allowed herself to be a little more indulgent on the theme of love, as is obvious from Sweet Memories – “No one could make me feel the way you used to do”.

Not that her trademark searing slide guitar work has been tempered. She’s still ready to put any “bad boy” who might come along and try to toy with her heart in their place, as she makes clear in no uncertain terms on the opening cut, Lookin’ Back On You. Then there’s the gut-bucket blues of Miss My Man. But hey, there are nine pumping cuts to for your ears to savour, so give the album a spin and know that there’s still life, heart and soul in Aussie blues rock and its name is Christina Crofts.