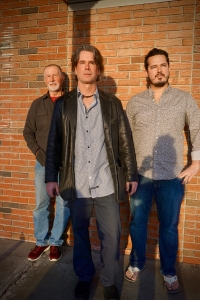 Subsequent to “Move On” we have reviewed three of Kenn’s albums appearing under the group name “The Kenn Morr Band”: “Higher Ground”, 2010, “Worth Imagining”, 2012 and “Afterimage”, 2014. Recently we discovered the band’s brand new album “Along the Way” in our mailbox with a request for a review. We were happy to oblige.

The inspiration for the songs that Kenn Morr writes is influenced by still-active legendary songwriters including Van Morrison, Paul Simon and Bob Dylan. The subject matter of his songs stems from everyday life and observations that surely relate to his listening audience.

The comparison we made in our previous reviews of KennMorr and songwriter Elliot Murphy certainly still applies to the ten songs on “Along the Way.” The opening track “Out of the Fast Lane” followed by “High Rollers” and “Footprints to the Sea” are as strong as Elliot Murphy’s songs. Kenn Morr, with his ever-soft and warm voice, should consider this comparison a great compliment as we are unconditional fans of such narrative songs.

Selecting other highlights from this album is an impossible task because there are no weaknesses on the CD. “Blow Wind”, “Let it Go”, “Anywhere Will Be Your Home”, “Mr. Wolfe”, “Run Away” and “Try Me Tomorrow” are of equally strong songs.

As if by chance when I received the new album “Along the Way” I was wearing a black Kenn Morr Band T-shirt (with white print) that Kenn sent me in 2008 with his album “Move On”. Almost ten years later, the quality of that T-shirt remains in perfect condition and it is pleasing that so many years later the quality of his songs has endured and even increased. It is a pleasure to hear these ten songs on “Along the Way” resounding in my living room so I am going to push the CD player’s replay button quickly.

Kenn Morr has been a frequent featured artist in our magazine. His new album “Along the Way” is his fifth album in the last nine years and follows previous releases “Worth Imagining” and “Afterimage” that were also reviewed by Rock Times Magazine. The American artist who lives in Connecticut produces and releases independently and features a band of Bob Gaspar (djembe, percussion) and Tom Hagymasi (violin, mandolin, dulcimer) who have been members of the band for quite some time. Only the position of bassist has changed in recent years however Pat Ryan, the newest member of the band, has established himself for many years.

Morr’s music is in the style of folk and Americana and it presents in a laid-back form and style. “Along the Way” begins beautifully with the relaxed “Out of the Fast Lane” featuring gentle accompaniment of bass, percussion and various stringed instruments. Where some of the older disks were not directly accessible these ten new songs immediately spread a cheerful, warm and earthy atmosphere. The voice and singing of the bandleader’s range is somewhat limited but radiates through depth and is very much at peace with the tone of the record. In other words one will happily listen to the man from the northeast.

Even the melodies this time are more skillful and bound to capture the ears of the interested music fan. Songs such as “Footprints to the Sea” provide a cool, natural foot-tapping swing which is immediately followed by the more thoughtful title song featuring strong background vocals from the start and roots-driven instrumentation and is my favorite song of the collection.

The thoughtful ballad “Anywhere Will Be Your Home” presents with fine mandolin accompaniment, djembe and Morr’s gentle harmonica. The album’s songs are characterized by their melancholy characteristics but are always positively optimistic. “Run Away” is upbeat while “Mr. Wolfe” bring a strong rootsy quality featuring the bouzouki. After starting quietly “Let it Go” shifts into high gear while “High Rollers” is quite pleasing to the ears. “Blow Wind” is a favorite for its loose, casual approach featuring cool instrumentation, sturdy refrain and arrangement. The bouncing “Try Me Tomorrow” forms a great melodic conclusion to a strong album.

Thanks to the quality of the songs, The Kenn Morr Band has delivered great work with “Along the Way”. The inclined music fan who can identify with Morr’s voice and has a penchant for cool, relaxing roots music will be very happy with this album. Great job guys!

Among its many vagaries life offers some certainties – they include the flow of memorable melodies and deeply-thought themes that permeate Kenn Morr’s mix of folk rock Americana. The latest album from The Kenn Morr Band, ‘Along The Way’ serves up a selection of laid-back warmth, involving softly embracing songs and pin-sharp observational lyrics. The instrumentation is as strong as ever, and like a few lucky artists (and good whiskey) Kenn Morr’s voice just gets better with age and the songs on ‘Along The Way’ are ample evidence of that – this is an album for those all too soon approaching winter nights, sit back relax and let the music wind you down….

It’s hard to pick ‘highlights’ because this is such a ‘complete’ album, not a single ‘filler’ in sight, every song in its right place and complementing each other start to finish. However, if pushed I’d mark out my favourites as: ‘Out Of The Fast Lane’, Along The Way’, ‘Blow Wind’, ‘Anywhere Will Be Your Home’, ‘Mr Wolfe’ and ‘Run Away’. Yes, there really are that many stand-out tracks.

Kenn Morr has crafted his life as carefully as he crafts his music.

The singer/songwriter, who has just released his 10th CD, “Along the Way,” has deftly balanced a career in music while holding tight to that most precious of commodities — his family life.

Morr reveals that in college, when he began his career as a musician, his goal was to become “bigger and bigger.” But marriage and fatherhood changed his perspective.

“Being dad comes first,” he said while sitting at his dining room table and awaiting the return of his younger son, James, at the end of the school day. “That’s why we tour largely in the Northeast — most nights we come home. If I (traveled further), I would miss these years.”

Morr’s studio is in his Colebrook home, a residence he and his wife decided upon in anticipation of the arrival of their first son, Nolan, now 16.

“It’s worked well to be able to work within a stone’s throw of my sons,” he said.

The fact he has limited the current scope of his career — despite his love for making music — says volumes about his dedication to his family.

“My musical career started after I stopped playing baseball after high school,” he said. “I found myself asking, what do I do now? I was in college, doing the responsible thing, but a voice kept saying that I always wanted to be a songwriter. Then I got a guitar for Christmas and it was life-altering.”

Like many artists, he had “a day job to fund my habit,” but he had found his true calling.

Now, at that vulnerable point when his children are teens, Morr’s latest album deals with “the feeling of time passing.”

“One reviewer said the album has a ‘bittersweet’ feel,” Morr said. “It’s about love, loss, life’s theme — my deepest and darkest thoughts put to happy music.”

Though the CD, released in the U.S. on Sept. 15, already has gained strong reviews in Belgium, the United Kingdom and Germany, he said bad reviews would not have discouraged him.

“I feel there is little anyone can say that would hurt me,” he said. “I just get more and more comfortable with our band’s style, and this last CD was so comfortable to make. All the songs came to me within a year’s span and so effortlessly. If people don’t like it, they just don’t get it.”

His band is composed of Tom Hagmasi, Patrick Ryan and Bob Gaspar, who play a variety of instruments and provide vocal harmony, while Morr, with his slightly smoky baritone, is lead vocalist.

The songs, which include titles such as “Out of the Fast Lane,” “Footprints to the Sea” and “Along the Way,” all were recorded with the musicians playing together in one room, rather than contributing tracks from different studios, which is often the norm these days.

“There is no replacing that energy in a room,” Morr said. “The whole time I listened to the CD, I was smiling.”

To learn more or to order the CD, visit kennmorr.com.

The Cool Album of the Day site went dormant for way too long. At times life interferes with life. One thing I’ve missed is finding cool little surprises in my mailbox. Yet once in a while I would still find a nice bubble wrapped package separating bills, coupon packets and info from the latest candidate that promises to make my life better.

However, every so often I’d still get one of those care packages. Every so often the content in said package is also a darn good listen. Can you believe that not every gift isn’t always good. Tru dat. The best ‘get’ that I ‘got’ in a long time was by The Kenn Morr Band.

One thing I always always do before I put finger to plastic when writing a new music review piece is to make sure that I’ve given it numerous listenings. I feel that you can’t be truly fair to an artist’s work on one visit. Put it this way from my Italian heritage perspective. An album is like a batch of home made pasta. It tastes better the next day after all the ‘gredients have blended. That doesn’t mean that you can’t draw something from the first listen though. Did anything jump out at you? Were you moved at all? Does it need salt or maybe more Parmesan?

One thing did jump out at me when I first listened to Along the Way. That was “If Roger Waters was to record an Americana album, this is what it would sound like.” I consider that a compliment. This album deserves passion buckets of compliments. It’s that good.

I find Kenn’s voice similar to Waters voice when Roger gives us the softer tunes. I find it very soothing and fits the music perfectly. Great vocalists sing what’s appropriate to the song. The music, which is driven by mainly acoustic instruments has a nice breezy feel to it. “Out of the Fast Lane and Let it Go” indeed. It’s weird to think that this came from a Connecticut based band. I wonder if they recorded it while being snowed in during another much too frequent ‘Nor’easter?’

This is music that will make you want to be at the beach. No, let me change that. I’m thinking more the evening, around a fire pit, sharing it with good friends. Maybe even while making smores with Roger Waters.