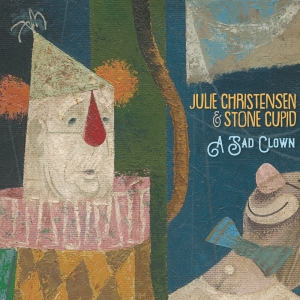 ​Julie Christensen and Stone Cupid (from the album A Sad Clown)
The names have all been withheld as Julie Christensen and Stone Cupid tag their characters with titles on her recent release, A Sad Clown. A mother wears the skin of the title track, admitting ‘your mama’s just a sad, sad clown’, the realization creating a confident honesty as experiential advice is passed between generations. A rhythmic shuffle introduces a “Burning Star” taking center stage in a after-hours parking lot and a dreamy audio mist plays a Springsteen song on a tourist town jukebox with “Exile on Myrtle Beach”. Stone Cupid spins the music for A Sad Clown, crafting a mountain Folk jam to launch “Slow Blue Fly”, rising like waves of heat in the lightly plucked notes of “The Sun”, quietly strumming support in “Like Nothing Hurts”, and picking up the pace for the lover’s quarrel raging in the trailer park for “Honey, Let’s Go to Town”.

Julie Christensen co-fronted post-punk rockers Divine Horsemen, and is a veteran of Leonard Cohen's bands (and the documentary "Leonard Cohen-I'm Your Man".) “A Sad Clown,” due March 16, 2018, is her seventh record; an acoustic yet gritty offering of her own music and a few gems by fellow East Nashville friends Tim Easton and Darrin Bradbury; and a stunning interpretation of Tom Waits’ Hold On that only Julie can deliver. Since Julie and her husband, artist and actor John Henry Diehl, moved to Nashville, A Sad Clown is her second album with her new Stone Cupid bandmates - regulars Sergio Webb, Chris Tench, and Steve Latanation - and this time with the bass-playing help of Jeff Turmes (Mavis Staples). 2016’s “The Cardinal,” a full-band rock outing, featured a song that was chosen for UK Label Rough Trade’s Rough Guide to Americana, alongside cuts by Patty Griffin and Mary Gauthier. She also spent time as a jazz chanteuse, tours, has performed and recorded in the studio with Steve Wynn, Van Dyke Parks, John Doe and Exene Cervenka. Now, Divine Horsemen is planning a west-coast reunion tour for October 2018.