Curtis McPeake and Andy May - The Good Things... 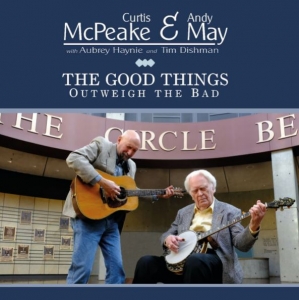 Curtis McPeake & Andy May - The Good Things (Outweigh the Bad)

Produced by Andy May

News:
Bluegrass Situation Review - Sept. 4, 2018: There’s a beauty in the timelessness of bluegrass. ...The genre is young enough that a few of its trailblazers are still among us, and stories of the legendary architects of the form are still told firsthand. The 90-year-old banjo player and recording artist Curtis McPeake is a testament to that timelessness. ...The fact that McPeake has been named a recipient of one of 2018’s Distinguished Achievement Awards from the International Bluegrass Music Association should come as no surprise. Full review
Curtis McPeake Receives IBMA Distinguished Achievement Award! Read Story
Country Music Hall of Fame performance - Musician Spotlight: McPeake & May - July 22
Reviewed in the July 2018 issue of Bluegrass Unlimited.
On-air interview on WSM's Coffee, Country and Cody, July 19, 2018
Cover story in Banjo Newsletter, May 2018 - Curtis McPeake Interview by Bob Piekiel

About the Artists:
Throughout a career spanning some 70 years in the music business, Curtis McPeake has played stints with some of the biggest names in the history of bluegrass music. Not only was he one of Bill Monroe's "Blue Grass Boys," recording 18 classic cuts with Monroe in the early '60's, he was a stand-in for Earl Scruggs in Flatt & Scruggs on many occasions, and he toured with Danny Davis and the Nashville Brass. McPeake was also part of the Opry staff band for eight years and a Nashville session player, appearing on hundreds of recordings. Website

Guitarist, vocalist, and producer on this project, Andy May started performing seriously in his teens, immersed in and part of the '60s' folk and old-time music revival in New York’s Greenwich Village. During that time, he performed at Carnegie Hall and made a name for himself as an up-and-coming musician and songwriter. Moving to New England in 1970, and subsequently to Colorado and then to Nashville, May's reputation has grown to include his extensive work as a producer and an educator. His credentials include a Grand Championship on guitar from Union Grove, NC, (1967) and an IBMA Award (2008) garnered by Swift River Music, the record label and production company that he started, owns, and runs. Website

Curtis: I have basically retired and no longer tour. Mother Nature has slowed me down, but I still love the music as well as ever. Andy and I have known each other for many years, and we enjoy playing some of the songs and tunes of bygone days. One day, on a lark, we decided that we would record some of our favorites. We had a ball recording them, and we hope you like them, as well. I am thankful to God that he has allowed me to have a part in this.

Andy: This album grew out of twenty-plus years of playing music together and discovering songs and arrangements we both love. On this project, Curtis plays “Betsy,” his iconic ca. 1939 Gibson RB75 banjo. I play the 1949 Martin D-28 guitar that I learned to play this style of music on as a kid: It’s my go-to guitar for backing up Curtis and Betsy. We recorded these tracks in August, 2017, two months before Curtis’ 90th birthday.

Song Notes and Order on CD:
*1. The Good Things (Outweigh the Bad) (3:38)
Songwriters: Josh Graves and Jake Lambert
Publishing & PRO: Scruggs Music-BMI
One of Curtis’ favorites, this song was co-written by his friend, Jake Lambert, and recorded by Flatt & Scruggs. Curtis first heard this song back when he worked with Lester Flat, filling in for Earl Scruggs in Flatt & Scruggs. The sparse arrangement here pays homage to Flatt and Scruggs but is decidedly McPeake & May, who worked it up specifically for this recording. Especially meaningful to Curtis, it was a shoe-in for the title track of this collection of well-loved songs.

*2. My Home’s Across the Blue Ridge Mountains (2:58)
Songwriters: Trad.
Publishing & PRO: Public Domain; N/A
This song is a traditional classic and has been recorded many times by many people over the years. Always a lot of fun to play and sing, it is a staple in the McPeake & May repertoire, and they never tire of it. Adding Aubrey’s tuneful fiddling and Tim’s rock-solid bass and bright tenor vocals takes it to another level.

3. Salley Gardens (2:32)
Songwriters Lyrics - William Butler Yeats/Music - Trad.
Publishing & PRO: Public Domain; N/A
True to the folk process, Andy and Curtis merged two ballads to come up with this arrangement. It all started when Curtis played his instrumental arrangement of the old murder ballad, Willow Garden, for Andy. Andy loved it, but though he used to render this song with great feeling as a youngster, he hadn’t sung it in a long time. Preferring to avoid such dark lyrics these days, Andy sought out alternate words that would work with the tune and do justice to Curtis’ arrangement. He chose Down by the Salley Gardens, a poem by William Butler Yeats which is often set to the traditional Irish air, The Maids of Mourne Shore. Yeats himself wrote the poem based on a fragment of an Irish ballad he had heard, possibly The Rambling Boys of Pleasure, a song which may, in fact, be related to Willow Garden in its origins. To our knowledge, however, this is the first time Yeats’ words have been sung to the Willow Garden.

*5. Home in the Rock (2:56)
Songwriters: Trad.
Publishing: Public Domain; N/A
Andy had learned this song from Wade Mainer recording when he was a kid. When he and Curtis first started picking together, Andy was inspired to start singing it again, and they worked up this arrangement over years of playing it together.

6. Sweet Sunny South (3:04)
Songwriter: WL Bloomfield
Publishing & PRO: Public Domain; N/A
This bare-bones arrangement, set up by Aubrey’s plaintive fiddle solo – lets the song tell the story. Curtis reminded Andy of this song, which Andy had learned as a kid from the singing of Mike Seeger and Charlie Poole. Originally a song about a bittersweet homecoming after the Civil War, there are several quite sad verses to Sweet Sunny South that Andy chose not include here, aiming for nostalgic rather than heart-rending. The song was published in 1853, with the title Take Me Home and the composer given as WL Bloomfield. (See sheet music.)

7. Grampa’s Mule (2:37)
Songwriters: Lauren LeCroy May and Andy May
Publishing & PRO: Swift River Music-BMI
This is the only song on the album that isn’t a bona-fide chestnut. Andy’s wife, Lauren, wrote this lyric about her Alabama grandfather’s infamous mule, Betsy, and Andy set it to music, putting a bit of the old fiddle tune Flop–Eared Mule in it just for fun. Curtis, who grew up working mules in west Tennessee, has many a mule story to relate, himself. When Andy first played this song for him, Curtis laughed and said, “I know that mule!” Curtis and Andy decided to present Grampa’s Mule as they would a tune for a country dance: Straight ahead, no frills. Curtis’ banjo breaks are legendary, but he’s also well-known for his wonderful backup style, which you’ll hear on this track.

*8. Steel Drivin’ Man (3:31)
Songwriters: Trad.
Publishing & PRO: Public Domain; N/A
Based on Curtis’ arrangement of John Henry, which is based in turn on Uncle Dave Macon’s version. Andy chose these verses from among the multitude in existence to tell the classic man-versus-machine folk legend. Curtis thought it would be fun to arrange it with a trio on top for this recording to embellish the theme a little bit.

*9. The Unclouded Day (2:45)
Songwriters: Rev. J.K. Alwood
Publishing & PRO: Public Domain; N/A
This wonderful old hymn is a tune Curtis loves to play and Andy has sung since he was a kid. Curtis’ playing on this cut is sparse and to the point, setting up the lovely interplay between his banjo and Aubrey’s fiddle and giving the old song a fresh feel.

10. Leather Britches (1:24)
Songwriters: Trad.
Publishing & PRO: Public Domain; N/A
Curtis wanted to end the album with an old-time fiddle and banjo duet. This cut features Curtis and Aubrey, with Andy and Tim joining in towards in the end.