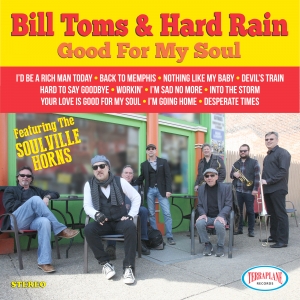 Pittsburgh, PA (July 18, 2017)
While it’s hard to put
a finger on any one sound that defines “American music,”the compositions of Bill Toms are as close a template as any. The Pittsburgh native, along with his band Hard Rain, delivers a sound that takes the greatest of America’s most beloved genres and melds them into a poetic representation of the best the country has to offer.

With his ninth full-length studio release, Good For My
Soul (street date October 27), Toms channels a
foot-stomping, wall-shaking blend of soul, blues, gospel, and rock vibes, all brought together with his lyrical specialty -- stories of everyday men and women doing their best to stay ahead while still managing to keep a dream or two in their heads.
Soaring horns, gritty licks, toe-tapping rhythms, and
Toms’ own rough-hewn vocals will draw listeners in, as
well as well-deserved comparisons to the greats such as Dr. John, Little Feat, Springsteen, Joe Tex, The Blasters, Otis Redding, and Rufus Thomas.
“The idea of a horn section behind my songs has been
something I’ve thought about for a while,” explains Toms.“Albert King, and all the Stax artists come to mind when I think of what true rhythm and blues can do. I wanted a piece of that; creating dynamics, and drama within the song; and fostering the deep emotion that a great horn section can give. The words also needed this place - in order to be fully interpreted as the representation of ‘my America,’ and the people who make up my small part of this world.”

Good For My Soul was recorded in February 2017 by
Oscar-winning composer Rick Witkowski, who also
co-produced the set with Will Kimbrough (Rodney
Crowell, Todd Snider). Both artists have collaborated with Toms frequently on parts of his earlier catalog.

Toms launched his musical career in 1987 as lead guitarist of Pittsburgh’s legendary band Joe Grushecky and The Houserockers, During that period, he opened for and played with such legendary names as The Band, Bob Dylan, Bruce Springsteen, Little Feat, and Stevie Ray Vaughn. While playing guitar, co-writing, and adding backup vocals for the Houserockers, Toms and the band recorded six studio albums and one live concert album. In 1995, The Houserockers released American Babylon, which was recorded and produced by Springsteen himself.

As a solo artist, Toms has opened for the likes of Buddy Guy, Levon Helm, Marshall Crenshaw, The Kennedys, Steve Forbert,and Ellis Paul. He’s plotting a string of regional east coast dates to support Good For My Soul, as well as a full
European tour in 2018.
7
What's This
Advertisement