No Time Flatt- "Calling After Me" 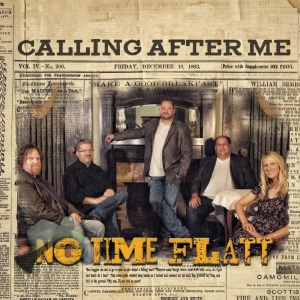 2019 "Calling After Me" Album Press Release
Jackson, TN, August 28, 2019: Calling After Me is No Time Flatt’s formidable sophomore project. A majority of the album is comprised of original material, and consequently it offers the listener a vivid glimpse of the artistic soul of No Time Flatt! Of these original offerings, Patrick Cupples, the band’s bass player, has written five songs beginning with a gritty The Golden Rule which is contrasted by Cupples’ beautiful tribute to his wife in Tammy Marie. Cupples also penned the title song, Calling After Me, which was released as a single on August 8, 2019. This picturesque song tells the sad, but often true story of boys who left home and mother at a very young age to fight in the U.S. Civil War, only to end up “calling after their mothers” when death or danger was imminent. The band’s official video of Calling After Me can be found on YouTube. Cupples further reveals his songwriting prowess with the melodic, yet sad waltz in I Can’t Live, complete with instrumental harmony lines. Finally, the album is concluded with his fast and hard-driving song, Whiskey and Tears, complete with a low lead, tenor and high baritone vocal stack throughout the song. Kevin Wright, the band’s guitarist, contributed the bouncy instrumental, Little Lou. No doubt, the most contemporary song on this album is How Deep Is The Lonesome which is an original and previously unreleased ballad of Nashville songwriter Kevin Hale. Hale has won or placed as a finalist in The Chris Austin Songwriting Competition at Merlefest, The Podunk Bluegrass Music Festival Songwriting Contest and The Smoky Mountain Songwriters Festival.

In addition to seven solid original tunes, the album is rounded out by renditions of Jim Croce’s beautiful ode to his wife in I’ll Have to Say I Love You in a Song, Buck Owens and Harlan Howard’s country shuffle, Foolin Around, Jim Reeves’ I’ve Lived A Lot In My Time, Lowell Dean Hearl’s driving gospel tune, Ten Plagues and the Caribbean-esque beat of Bob McDill’s, It Must Be Love, which was originally recorded by the legendary Don Williams and later by country superstar, Alan Jackson. Creative arrangements, intricate harmonies, a variety of vocal offerings and solid execution abound in this second project from No Time Flatt. Listeners are sure to find something they like here. Calling After Me is now available for purchase through the band’s website store at www.notimeflatt.com or digital download via iTunes, Google Play, CD Baby and other digital outlets.

Formed in 2015, with band members from Western Tennessee, No Time Flatt includes the talents of Kevin Wright (guitar, vocals), Patrick Cupples (bass, vocals), Becky Weaver (fiddle, vocals), Steve Moore (banjo, vocals) and Kevin Keen (mandolin). At live shows, fans often say that No Time Flatt is adept at connecting with and entertaining the crowd and are “consummate professionals”. The band claims that its success at pleasing listeners is due to their diligent effort in selecting a variety of great songs, then focusing on tight harmony vocals and solid instrumentation. The ensemble of outstanding musicians delivers solid bluegrass with ample original material, sprinkled with classic standards, some with a unique twist, and even songs from other genres. The band’s name evolved from the contributions of Lester Flatt, who was a founding member of the classic configuration of Bill Monroe’s Bluegrass Boys and later, Flatt and Scruggs and The Foggy Mountain Boys. No Time Flatt’s loyal fans are, of course, known as Flattheads!

No Time Flatt’s self-titled, debut project, was released in 2017, and popularity quickly grew from there, with the band capturing the “Bluegrass Artist of the Year” awards in 2017 and 2018, at the annual Tennessee Music Awards. The band was nominated again in 2019 for the same and also for “Entertainer of the Year”, which expands across music genres. The online bluegrass magazine Bluegrass Today reviewed the first album saying, “No Time Flatt makes a solid debut here with strong instrumental work and several vocalists who handle lead and harmony vocals…Fans of the straightforward modern traditional sound should certainly find something to enjoy here.” (December 5, 2017)

The word is out about this fine band. They are appearing throughout the South in Tennessee, Kentucky, Mississippi, Missouri, Alabama, Arkansas, Georgia and North Carolina. No Time Flatt recently performed for their third straight year at WSM Radio’s Pickin’ on the Plaza, held in conjunction with the Bluegrass Nights at The Ryman series in Nashville, TN and they have also played shows at Dollywood and Bluegrass First Class.

You’ve heard of Lester Flatt, of course, and up-and-comers Flatt Lonesome, but what about No Time Flatt? The west Tennessee-based band recently released their debut album, a self-titled effort filled with a number of classics and more recent bluegrass favorites.

The traditional-leaning group has selected songs from Don Reno, Carter Stanley, and Flatt and Scruggs along with tracks penned by Jimmy Fortune, Harley Allen, and other more recent writers. Bass player Patrick Cupples and guitarist Kevin Wright contribute one original apiece. It’s a well-thought out album that allows the band to introduce its own style while still providing a sense of familiarity for new listeners.

A pair of Blue Highway covers, both from the pen of Wayne Taylor, are highlights of the album. Keen Mountain Prison has clear harmonies on the chorus and a nice mournful feel. Tasteful banjo from Steve Moore backs the verses, while Kevin Keen and Becky Weaver offer strong solos on mandolin and fiddle, respectively. Wright and Weaver provide a wistful opening for Before the Cold Wind Blows, pairing well with the song’s story of a farmer caught up in big city trouble.

There’s a bouncy, straightforward cut of Harley Allen’s Suzanne, faithful to Allen’s recording with Mike Lilly from several decades back, and a fine rendition of New Grass Revival’s This Heart of Mine with standout banjo courtesy of Moore. Also enjoyable is the acoustic version of Alabama megahit Dixieland Delight. I wouldn’t have ever said that Dixieland Delight needed to be re-recorded, but No Time Flatt’s rolling, easy-going take on the song is actually really good. The fiddle breakdown at the end is a nice touch, as well.

Most fans will be familiar with tracks like Say Won’t You Be Mine and Dim Lights, Thick Smoke, both of which are accurately rendered. Somehow Tonight is spiced up a bit, with a saucy mandolin intro from Keen and Jimmy Martin-style drums courtesy of Cupples. The drums are a bit unexpected, but I like the swagger they provide to the song. Long Gone is a little more Lonesome River Band than it is Reno & Smiley, but that fits with the group’s overall modern traditional sound.

The album’s two originals include a crisp instrumental from Wright, Roundup, that moves along at a nice clip, and an intriguing piece from Cupples’s pen. Titled Dollarhide, it tells the story of a Kentucky moonshiner who falls upon hard times. It has more of an Americana or folk flair than the rest of the album, with a catchy repeated chorus of “The holler’s got three choices, he’d say it all the time: coal mine, moonshine, or move it on down the line.” On the surface, it seems to be a well-written ode to one of bluegrass music’s favorite careers; however, fans of the Loretta Lynn biopic Coal Miner’s Daughter will recognize it as a tribute to a minor character in the film who is friends with Lynn’s husband. No Time Flatt makes a solid debut here with strong instrumental work and several vocalists who handle lead and harmony duties. I’d definitely like to hear more originals from them, and perhaps see them dig a bit deeper into the bluegrass catalog. Fans of the straightforward modern traditional sound should certainly find something to enjoy here.

For more information on No Time Flatt, visit them online at www.notimeflatt.com.

Bluegrass Unlimited Review
NO TIME FLATT—No Label, No Number. The band name is a reference to Lester Flatt, as they offer a nice mix of traditional and contemporary selections from a variety of sources. The group consists of Patrick Cupples (bass, drums), Kevin Keen (mandolin), Steve Moore (banjo), Becky Weaver (fiddle), and Kevin Wright (guitar). From the traditional side, there’s Joe Maphis’ “Dim Lights Thick Smoke,” Earl Scruggs’ “Somehow Tonight,” Carter Stanley’s “Say Won’t You Be Mine,” and Don Reno’s “Long Gone.” The more contemporary selections include Wayne Taylor’s “Keen Mountain Prison,” Jimmy Fortune’s “I Believe,” and “Dixieland Delight” from country band Alabama’s repertoire. Cupples offers his “Dollarhide” and Kevin Wright gives us “Roundup.” The band has good lead vocals and tight harmonies that complement their arrangements and instrumentation. This is a nice debut release from this Tennessee group. http://bluegrassmusic.com/content/2017/releases/new-releases-august-2017/

NTF Peforming for the Tennessee Music Awards
September 1, 2017
After being nominated in the bluegrass category of the Tennessee Music Awards, No Time Flatt will be performing for the Red Carpet event on Thursday evening, October 5. The event will host every major genre and media with fan voted awards. The event will take place on Thursday night, October 5, 2017 at The University of Memphis Lambuth Campus, 705 Lambuth Blvd., Jackson, TN 38301. For more information and performers visit http://www.tnmusicawards.com/

NTF Releases Debut Album
Jackson, TN, May 1, 2017: http://notimeflatt.com/assets/no-time-flatt---press-release.pdf No Time Flatt is blazing a red-hot trail on today’s bluegrass music scene with their highly energetic and hard-drivin’ live performances. No Time Flatt recently released their debut recording project which is now available for purchase through the band’s website store at www.notimeflatt.com or digital download via iTunes, Google Play, Amazon Music, CD Baby and other digital outlets.
Centered around tight harmony vocals and great song selections, No Time Flatt strives to perform high-quality bluegrass music by selecting great songs and material that has not been recorded often in bluegrass. The band includes originals and music from other genres, tempered with a mix of some classic bluegrass standards which are arranged by the band in a unique way. Formed in 2015, No Time Flatt includes the talents of Patrick Cupples (bass, vocals), Steve Moore (banjo, guitar, vocals), Kevin Wright (guitar, vocals), Becky Weaver (fiddle, vocals) and Kevin Keen (mandolin). Fans of No Time Flatt are lovingly referred to as Flattheads!

The debut project contains two original tunes: “Dollarhide”, composed by Patrick Cupples, the group’s bassist, and the other entitled “Roundup”, a hard-driving instrumental composed by Kevin Wright, the group’s guitarist. The catchy original song “Dollarhide” is a chronicle of Loretta Lynn’s coal-mining, moonshining and sometimes chicken-thieving cousin, Lee Dollarhide, of whom she was most fond. His untimely death occurred when he was caught stealing someone else’s moonshine! Also of special interest is No Time Flatt’s bluegrass interpretation of Ronnie Rogers’ number one country hit tune, “Dixieland Delight”, which was recorded and made popular by the
mega band Alabama. “Lonely Moon”, written by Patrick Brayer, is a picturesque and lonesome-sounding tune about a prisoner and his loved one who is far, far away. The tune is an example of the group’s ability to dig up tunes that would have been otherwise overlooked. Although “Dim Lights, Thick Smoke” has become a classic western and bluegrass tune, the group sings it with a vocal stack that is somewhat different than other versions. No Time Flatt uses a low lead, tenor and high baritone vocal stack, displaying the diverse vocal capacity of the
group. Finally, No Time Flatt has made a simple yet beautiful statement of both their music and their beliefs with their interpretation of Jimmy Fortune’s “I Believe”, using just guitar and fiddle as instrumental accompaniment.