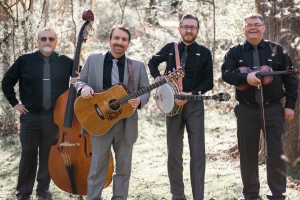 Ralph Stanley II & The Clinch Mountain Boys are still celebrating their Billboard Bluegrass Album Chart achievement for the record released on Stanley Family Records last year. The band is still regularly appeared on that coveted Top 15 chart throughout 2018. This self-titled album was the first release for the group since Ralph II took over the Clinch Mountain Boys band name in 2016 per the wishes of his late father, Dr. Ralph Stanley.

The band includes Clinch Mountain Boy John Rigsby on fiddle, mandolin and vocals; Alex Leach on banjo and vocals; Randall Hibbitts on the upright bass and vocals; and Ralph Stanley II on the guitar and lead vocals. This band configuration brings a lot of talent, energy and humor to the stage as they perform old-time favorites, bluegrass hits and new original material.

Ralph II has had two Grammy nominations on previous albums he recorded with Rebel Records. In 2002 he earned his first Grammy along with his father, Dr. Ralph Stanley for their collaboration with Jim Lauderdale on Lost in the Lonesome Pines. Ralph II has proven to be an accomplished songwriter and has 6 solo albums under his belt, along with the highly acclaimed duet album with his father titled Side by Side.

"Lord Help Me Find the Way" is a collection of Gospel toned and inspirational songs that Ralph II feels emody a lot of emotion and sentiment that not only he and his family have regarding the life and death of his well-known Father, but also that of the bluegrass community that loved him. He hopes that this album will in a lot of ways, provide a beautiful remembrance and serve as a dedication to Dr. Ralph Stanley and all the lessons and memories in music, as well as family and friendship, that he left behind for all of us.

Next year marks Ralph Stanley II's 25th year in the bluegrass music industry, making music on his own, as a Clinch Mountain Boy, alongside his Daddy, and now as the band leader of the Clinch Mountain Boys himself, and he is looking forward to celebrating and continuing to find ways to make his family name proud. Find out where you can see the band perform online and follow them on Facebook.

Radio programmers can download the new album on Airplay Direct.