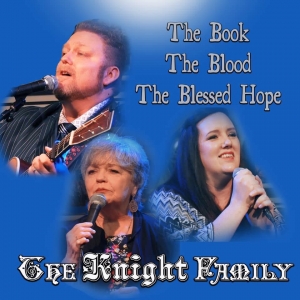 "Like It Used to Be" Tour Announced
AOK Records artist, The Knight Family has announced a 2018 expanded touring schedule. The events will be known as “Like It Used to Be.” Rather than a full band or accompaniment tracks, the group will appear with just a guitar presenting their Appalachian infused brand of Mountain Gospel music.

Group manager, Adam Knight states, “We travelled with big arrangements for 30 years. Night after night, folks would come to meet us after we would sing and over and over they would tell us that their favorite portion of our set was the acoustic or acapella moments.” He continues, “Then on a lark, we produced the “Keep on The Sunny Side” album with just me playing acoustic guitar and it was received better than anything we have ever recorded.”

The schedule for the “Like It Used to Be” tour will be announced near the end of December. The group has always been known for their many church and concert appearances. 2018 will feature far more festival appearances. Adam explains, “There is a revival right now of acoustic music and acapella harmony. The Lord is opening major doors for us in the Bluegrass realm. We made the decision not to pursue the Southern Gospel industry a long time ago. That world is reached with the message we are trying to communicate. The Bluegrass world is a much better fit for us, musically, and they love this old-fashioned mountain music.”

Currently in their 31st year of music and ministry, as a group 2017 marked the 50th year of Gospel singing by group matriarch, Linda Knight. She was recently honored by Congressman Phil Roe with a proclamation and an American flag, which had been flown over the US Capital Building.

The family has shared the stage with many well-known artists such as Jeff & Sheri Easter, Ralph Stanley, Rascal Flatts, Shenandoah, Ben Haggard, Ashley Campbell, Sammy Kershaw, The Primitive Qt., The Bowling Family, The McKameys, The Perry's, The Singing Cookes, The Nelons, LuLu Roman, Dale Ann Bradley, Michael Combs, The Kingsmen, Inspirations, The Spencers, Barbara Fairchild, The Greene's, George Hamilton IV and many more. National speakers such as Uncle Si from Duck Dynasty, Franklin Graham, Zig Ziglar and Bobby Allison have all appeared on programs with the group