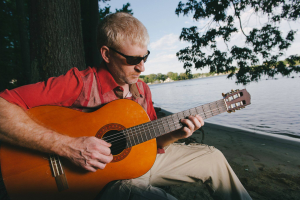 About the CD
Home is another fruit of Tony's built up song writing material, mostly guitar riffs, since the works with the popular Blues Rock band Electrofied. This time more rock oriented, with melody contributions from former Fetal Records musicians. The download songs are minus Liar, Something, and Home which are available from the Another Way Tony Fazio release page and All this Happened which is available from the A Colorful Christmas CD.

About Tony Fazio
It should be said that the soloist is well source for compositions. Tony Fazio is a great example, as Fetal Records now has more tunes than they can keep up with.

Tony Fazio is a Berklee College of Music Graduate and professional touring and recording musician with multiple songs and albums on current blues radio.

Tony has experience playing with Memphis Gold, Bobby Parker and Charlie Sayles, 3 of the big DC blues legends. Tony has toured all over the world. He has also played american blues guitar at many of the major blues festivals from United States to Europe.

Tony is currently performing with many different bands, including Electrofied Blues Band and Charlie Sayles and the Blues Disciples. He is actively involved in the Fetal Records Subsidiarity projects. He also has a a more rock based album on Fetal Records called Home. He is the primary featured artist on the new Charlie Sayles and the Blues Disciples CD and A Colorful Christmas. The latest work is his familiar guitar playing on Scott Taylor's 2016 Blues Kitchen album. See Discography.