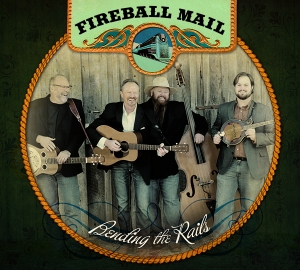 Congratulations to Fireball Mail, the 2016 winners of the prestigious Telluride Band Contest.

The annual invitational competition takes place at the Telluride Bluegrass Festival situated high in the Rocky Mountains of southwestern Colorado. Twelve acts are selected to compete, with the winner taking home $750 in cash plus a main stage booking for the next year’s festival.

Fireball Mail hails from Nashville and consists of Brad Bulla on guitar, Phil Easterbrook on banjo, Caleb Edwards on mandolin, and Joe Brown on bass. They performed three original songs from their debut album, Bending The Rails, in taking the crown at Telluride.

On Saturday, the morning started out with the final round of the Band Contest. The four remaining groups, Chain Station Quartet, Ragged Union, Fireball Mail and Mile High Express, rang us into the late morning, with 2015’s winner, Lil Smokies, taking the stage right after. The winner Fireball Mail hails from Nashville and I wasn’t surprised to hear they took it all — their fast-paced and full vocals amplified the energy that freely flowed between one another. As winners, they are guaranteed a spot during next year’s Festival.

Fireball Mail, an up and coming bluegrass band based in Nashville, TN took home the gold at the prestigious 2016 Telluride Bluegrass Festival in Telluride, CO last week. The Telluride Band Contest is a nationally recognized bluegrass contest. Finalists are awarded cash and prizes, as well as critical acclaim, well-deserved recognition, and a spot on the 2017 lineup to perform on the festival main stage sharing the spotlight with the likes of Béla Fleck, Jerry Douglas, Chris Thile, Tim O'Brien, and Sam Bush.

The band with Brad Bulla on guitar and vocals, Phil Easterbrook on banjo, dobro, and vocals, Caleb Edwards on mandolin and vocals, and Joe Brown on upright bass performed three original songs in the final round to emerge as the 2016 contest winners. The contest win follows on the heels of the release Fireball Mail’s debut CD “Bending the Rails” available for purchase through most major music outlets including Itunes, Spotify, and Amazon or on the band’s website - www.fireballmailband.com