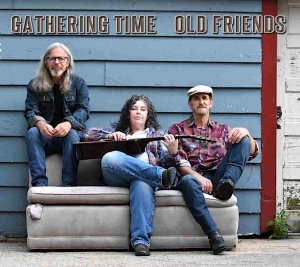 Voted best band runner-up (and top folk band) in the 2011 Long Island Press readers' poll, Gathering Time starts with the spirit of Peter, Paul & Mary, adds the rock energy and vocal complexity of Crosby, Stills & Nash, mixes in a bit of The Byrds and a jot of Joni Mitchell to be a head-turning folk-rock harmony trio described recently as "getting a whole beehive-full of buzz" on the northeast regional folk scene.

The trio has roots in traditional folk as well as '60s and '70s folk-rock, and have been known to sprinkle in some of those classics among their original sets.

With their seamless vocal blend, precision guitar playing and inspired percussion, Stuart, Hillary and Gerry's stage chemistry makes clear that they take the music (though not themselves) very seriously, with an infectious energy that wins over even fans who never considered themselves folkies.

"Keepsake," the bands fourth full-length CD, builds on the strength of "When One Door Closes..." which was #3 on the international Folk DJ chart for January, 2014.

No less an authority than WFUV's John Platt has written that they are "among the finest performers in the New York metropolitan area, whatever the size of the venue, from a house concert to an outdoor festival," with "harmonies that can charm the birds out of the trees, strong original songs, and a savvy repertoire of cover songs, ranging from traditional folk to classic rock. They appeal to audiences of all ages."

Bob McKillop of MaineFolkMusic.com writes, "Gathering Time ... has perfected two separate but related art forms: three part harmony and having a ball on stage! When they harmonize, some sort of fundamental, cosmic concordance occurs that makes you very happy that you have ears.”