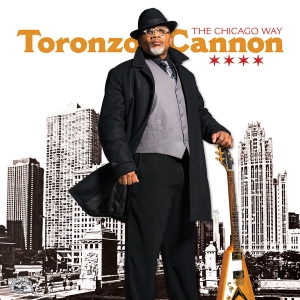 Living Blues
Cannon’s storytelling is vivid, laced with wit and pathos. He bursts with youthful fire in his guitar work and his tough and deep vocals. He intensifies his spidery dexterity with a molten-lava tone. He plays ideas, not just notes. Emotionally and musically focused. This is a first-rate, major label debut from an artist whose long-endured “well-kept secret” status should now be a thing of the past. - Dave Whiteis

Blurt
Alligator keeps finding and recording the next generation of young blues greats. The Chicago Way marks the Alligator debut of the next great bluesman. On The Chicago Way you can see the emergence of a soulful singer and first class storyteller. Cannon does not just recycle what electric blues has been doing for 80 years. He writes about what he sees and tells stories of common experiences in uncommon ways. And then there is the powerhouse last track entitled “I Am” which is one of the strongest, most hypnotic songs written in years. A song that transcends the blues. It is just perfect. Toronzo Cannon proves that the blues is alive and well in the 21st century. Toronzo sings and writes about real life on the streets. Kudos once again to the great job being done by Alligator and its head, Bruce Iglauer. - Tom Callahan

Elmore Magazine
This explosive debut might just mean that Toronzo Cannon could give up his day job as a bus driver for the Chicago Transit Authority. Something tells me, though, that he may just want to hang on to it for a while longer so he can continue to tap into the pulse of Chicago’s people and derive more story material for his songs. He wrote all eleven of them for this, his Alligator Records debut. Over the last fifteen years or so, Cannon has been one of the hardest workers on the Chicago blues club circuit. Playing alongside the best and similarly ambitious blues players in the world has just continued to sharpen his skills as both a fiery guitarist and a writer with subject matter spanning pain to joy to humor. He has earned every bit of the recent acclaim that’s come his way, much of it tracing to his amazing set at last year’s Chicago Blues Festival. From here on out, he will be in the spotlight for a good long time. His spirited enthusiasm is contagious. Toronzo grabbed my attention, mostly because he was the closest to capturing Hendrix’s guitar sound than any other guitarist I’ve heard. This time around, I’m struck more by his attention to detail in every note and every word. Cannon has a deep respect for his predecessors and channels the spirit of artists like Magic Sam, Otis Rush, and Son Seals. Powerful and relentless, smoldering and dynamic . The word ‘electrifying’ characterizes every single tune in both his incendiary guitar soloing and heartfelt vocals.