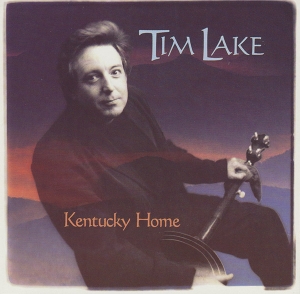 This album was recorded live in a barn on August 8, 1998, on the J. Peterman Farm during an annual private event. It was performed live by Tim Lake, Ken Holbrook, and James Moore and recorded digitally on location by Bill Johnson, W.H. Johnson Co. The song selection is very representative of the music from Lake's home state of Kentucky and is his first recording of predominantly traditional music. Tim was very happy with the performances on this recording (playing background banjo and singing the correct words at the same time can be a daunting task) and we at Padraig Records are glad to add this collection of primarily traditional music to our catalog.

A original songs words, music, and arrangements by Tim Lake and published by Padraig Publishing, ASCAP. All Rights Reserved.


Kentucky Home – “Tim Lake is probably best known for his inventive use of the banjo. He’s played jazz, classical, and blues and extended the range of the instrument far beyond what others have done. What might have been overlooked is how well he plays straight old-time banjo, but this new two-CD set should help set the record straight. All the classics are here …. played with Lake’s trademark skill and imagination. Lake’s between-song chatter is funny and informative and adds to the relaxed nature of this recording. Lake has come up with yet another enjoyable album that, even at over 135 minutes of music, never wears out its welcome.
–Jim Lee, Dirty Linen, October/November 2001


Kentucky Home – “Tim Lake is one heck of a banjo player as is evidenced on his latest two-CD effort, which contains 33 tunes performed live with his trio. While many of the tunes may be traditional, Lake can hardly contain himself to one style of playing and is prone to a lightning quick chromatic flourish with tinges of blues and jazz at any given moment. His playing sounds fresh with interesting ideas. There is a lot of good music on Kentucky Home. Fans of 5-string banjo – traditional and otherwise – should definitely consider adding this one to their collection.
–Eddie Collins, Bluegrass Now, October 2001


Kentucky Home – “He’s a folksinger, he’s a songwriter, he weaves jazz and blues riffs in amongst his Scruggs licks, and even by banjo player standards, his musical imagination often creeps into dark corners and crevices that the rest of us can’t fathom. —— Kentucky Home represents something of a return by Lake to his bluegrass roots —- While Lake’s banjo style carries the rock-solid timing that’s to be expected of a Crowe disciple, there’s also a melodic side to his picking that few others can claim to be nearly as good at.”
— John Lupton, Sing Out! Summer, 2001


Kentucky Home – “Tim Lake is one of those little-known musicians who deserve much more fame. His banjo style is something to envy even for the great banjoists of the past and above all he manages to put together an explosive mixture of styles that see blues and bluegrass in jazz as the right fuse. His previous “Jazz With Bluegrass & Blues” from 1995 is a record that ennobles the banjo beyond the stereotyped prairies and green hills with the variety of styles and rhythms that are found in each song. With his latest “Kentucky Home,” Tim returns to his Kentucky traditions but without nostalgia or sentimentality. His approach is lively and virile and his arrangements of classics like “Arkansas Traveler” mixed with Irish reels and jigs together with a detailed version of “El Condor Pasa/Caravan” still manage to intrigue. The disc was recorded live during an intimate concert and conveys the direct and immediate atmosphere of a concert with friends. We must absolutely remember Ken Holbrook and James Moore who together with the leader make this album particularly interesting and worthy of a refined disc.”
— Robert Menabo/Chitarrando/Bluestime.it Magazine (Italy: Italian to English translation), November 2001


Kentucky Home – ‘Given the combination of Lake’s instrumental virtuosity, his broad stylistic range, and the informal live setting, this album has some great moments.”
— Rick Anderson, Bluegrass Unlimited – June 2001