Charlie Sayles and the Blues Disciples 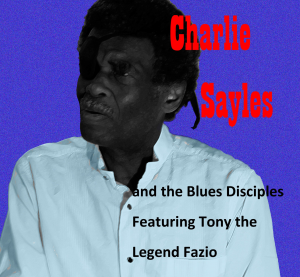 About the CD
After a long 20 year recording break, including 5 years of homelessness, the internationally known Blues journeyman returns exclusively on Fetal Records, to sing about those things close to his heart and soul.

Charlie Sayles Biography
'Long range recon - Our six man team had just come down from the mountain. We came upon a village. Two or three children came out and pointed to some hedge groves over yonder saying "U C Viet Cong". We went over to investigate and a grenade came flying out of the hedge grove. Moments later we saw four or five Viet Cong out the back of the hedge grove starting to run across the rice patties...The team leader and the other three of us went racing after the Viet Cong. They were faster than us because we had our gear on. They just had their weapons and we couldn't catch them. As we came back we were pretty tired from running when our team leader gave us the hand signal to stop. He pointed to the hedge grove we were walking parallel to and whispered VC, then hand signaled one of the men to circle and get behind the hedge grove in case they tried to run...' From Charlie Sayles’ recounting of his service in the Vietnam war.

Charlie recalls hearing music in Vietnam by bands touring to entertain the troops. There the impression of how music can make people feel was imprinted. Going from not being allowed to speak or make a sound on mission with the 101st airborne to hearing a Sonny Boy Williamson tune congealed Charlie's career of speaking with the harmonica.

Such is the background that landed Charlie back to Roxbury, Mass where he taught himself the harmonica. Massachusetts is the state where he was born in 1948. Son of a trumpet player, he spent his childhood in foster homes. In 1971, while playing the streets for money in Atlanta Georgia, a musician friend made the mistake of saying Charlie couldn't write a song. "I Like, What I Like" was composed 30 minutes later and is still part of Charlie's repertoire. In New York, the curator for American art, music, and folk culture at the Smithsonian, Ralph Rinzler, heard Charlie playing on a street corner and set him up playing the harmonica with Pete Seeger. Charlie went on to play with the likes of Bill Monroe and Bobby Parker and audiences all over the United States and internationally have enjoyed his vocals and speaking harp, including President Jimmy Carter and audiences at Carnegie Hall. His first album was in 1976 on the Dusty Road Label. He has several releases on JSP Records. Preferring to keep his street playing current, Charlie likens more formal concerts to putting on armor and going to war again. Charlie has been sponsored by the National Endownment for the Arts to teach harmonica to inmates in Washington DC.

Consciously or subconsciously, shunning the big name career track seems to keep him close to the roots of his inspiration to write and perform while staying an original. Charlie has also received his share of betrayal in the business but seems to keep on keeping on.

Now he finds himself associated with a trusted group people, Tony Fazio and the team at Fetal Records. His long awaited sequel works have found a home with this team.
7
What's This