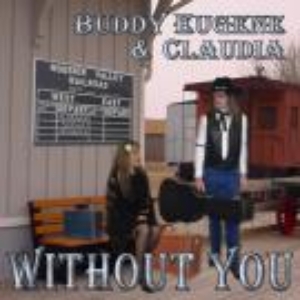 Buddy Eugene was born in Elkhart, but raised in Dunlap, Indiana. He has fond remembrances of country music in his life. Buddy would often go to sleep listening to the WSN's Martha White, Grand Ole Opry. He also remembers is Dad having friends over, playing music all night long, or at least until he went to sleep.His musical talents grew singing with his father and developed into duets with his dad's harmony.Buddy's most influential artists were his dad,Paul Van Scoik, George Jones, Bill Anderson, Conway Twitty, Loretta Lynn, Waylon Jennings, and Merle Haggard, just to name a few Buddy met Claudia at a jam in Silver Lake, Indiana in 2003, and both of them have been playing country music together ever since. People who heard their music kept asking them about making a recording so more people could share their songs. They talked it over with their songwriting friend, Ewen Vires, and this led to the collaboration of, Without You, Buddy Eugene & Claudia's debut album being released July 8, 2010.
- See more at: http://www.buddyeugene.com.hostbaby.com/band_bio/#sthash.PkURAFF4.dpuf

Claudia Bailey was born and raised West of Akron, Indiana in a peaceful and beautiful rolling hill country. Her father and mother loved radio music, including the country sounds of Mel Tillis and Waylon Jennings. Even though country may have been their favorite, they loved all kinds of tunes including the famous "big band" sound. Her family of several generations loved music and excelled in singing group harmony.Claudia has returned to playing the guitar and singing harmony parts after starting at nineteen years of age. Harmony singing is rapidly becoming her favorite element of the music. Her father had an amazing way of projecting his voice while just working outside around their homestead. She recalls being very much in awe of his full rich sound he was able to create. Claudia's own voice is delicate, gentle and understated, yet no less valuable in contributing to the overall sound of the duo.
- See more at: http://www.buddyeugene.com.hostbaby.com/band_bio/#sthash.PkURAFF4.dpuf
1
What's This
Advertisement