Eight O'Five Jive Too Many Men 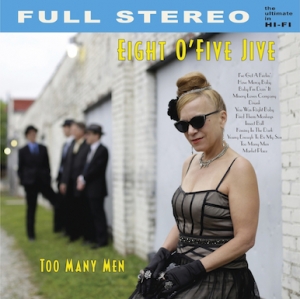 “This band is much more than jump blues revivalists as Scheinman, Mosser, Bois, and Spencer nail each and every tune. They along with vocalist Shropshire are deserving of a little fuss. Get with Eight O’Five Jive.” —Richard Ludmerer, Making A Scene

“This is one fine piece of work by a band who stops at nothing to satisfy their audience …” —Bill Wilson, Reflections in Blues / Billtown Blue Notes

“Decked in sharp suits and hep-cat attitude, the band has built a reputation for recapturing the sounds of a cocktail-laden, swinging era that has become lost in the modern musical landscape.” —Andy-Lee Frye, The Leaf Chronicle

“Eight O'Five Jive, a group that blends swingin' blues and early rock 'n’ roll, with a hint of jazz—they're sure to get you on your feet.” —Examiner.com

NASHVILLE, TN — Award-winning jump blues firestarters Eight O’Five Jive reignite that classic style with their debut album Too Many Men, due April 14 on the Red Rudy Too Tunes label. The dozen-song set is a jump blues operetta, drawing on vintage and original tunes that swing and rock to tell the story of one woman’s search for true love within the demimonde—with plenty of humor and hot performances along the way.

Too Many Men kicks off with Big Maybelle’s early ’50s hit “I’ve Got a Feelin’,” with Shropshire’s warm and ebullient singing setting the album’s sassy, savvy tone. By the time the album serves up Big Jay McNeely’s hilarious “Insect Ball,” Shropshire’s hard-honking “Young Enough To Be My Son,” her woozy boozer “Misery Loves Company,” and the mambo-flavored finale “Market Place,” the disc’s upbeat journey from lost love to redemptive romance is complete. “Young Enough To Be My Son,” which Shropshire wrote after getting hit on at a Toronto bar, is also Eight O’Five Jive’s first video, viewable at https://www.youtube.com/watch?v=mhdzk1gLJUQ .

Although Eight O’Five Jive’s music has a timeless exuberance, they are the torchbearers of a style that is rooted in the ’40s and ’50s, when the jump blues genre was minted by artists like Louis Jordan, T-Bone Walker, Roy Brown, Wynonie Harris and Bill Doggett. In keeping with the music’s pre-digital-age origins, Too Many Men will also be released on vinyl.

“We cover and expand on a sound and a time in history when blues, jazz, doo-****, swing, big band and other styles from all over the country got jumbled up together in one big pot before it became rock ’n’ roll,” says Scheinman.

“Our songs have attitude and lots of character,” Shropshire adds. “Blues has as vast a paradigm as jazz, classical, rock ’n’ roll or folk. And we love being able to present a strong, tightly arranged and diverse selection of music every time we take the stage.”