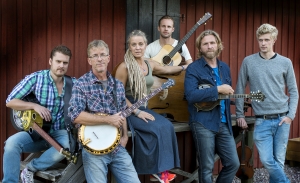 Swedish Downhill Bluegrass Band is one of Europe’s most prestigious, well known and highly regarded bluegrass bands. The six piece group, consisting of musicians well respected both in Europe and the USA, play traditionally rooted bluegrass with a contemporary flare. The band originates from Bergslagen, a region in Sweden culturally marked by its heavy industries and mining districts.

In their music you can hear the geographical and cultural similarities between Appalachia, USA, the home of bluegrass. Traditional bluegrass has predominantly reflected poor conditions in the countryside and mining villages. The music invokes the hard work in the mines and fields, the wide open spaces, the simple life, jealousy, prison guards and the battle between God and the Devil. Downhill’s music reflects many of these themes. Music and lyrics express life in the here and now but with an awareness of tradition.

On invitation, Downhill performed more than once at the IBMA Awards in Nashville on account of their excellent playing skills and unique sound, as well as their songwriting abilities. As well as America, they have played festivals in most European countries. Most of the repertoire they perform is their own, and some of these songs have been recorded by both American and European artists