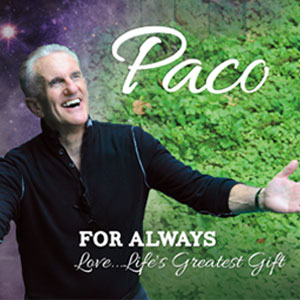 
Click here to return to The World Of Paco

“FOR ALWAYS”
The Theme of the Album “For Always” is songs about Love – yes love, in all of its many challenging forms. From the haunting lyrics and melodies created by Andrew Lloyd Webber with songs such as “Music of the Night” from Phantom, to uplifting duets and then to old standards like Buddy Holly’s “True Love Ways”, I share many of the songs that dwell not just in my heart but deep in my soul as well. I am indebted to two highly gifted singers, Michelle Hylan and Lauren O’Keefe for sharing their vocal talent to four incredible duets. The lead song in fact, which is also the name for this Album “For Always”, is a terrific duet from the movie “A.I” (for Artificial Intelligence) as originally sung for the movie score by Josh Groban and Lara Fabian. The song sets the mode for the entire album as it speaks to the incredible power of love, which can span the galaxies and which literally lasts “For Always”.

Paco is affiliated with both Bristol Recording Studios & Entertainment in Boston, where he produces his music and with John Robert Powers Agency (JRP New England) in pursuing his modeling and acting career. This February he heads out across America for three months, literally taking his new “For Always” CD & show on the road from Atlanta to New Orleans to LA.