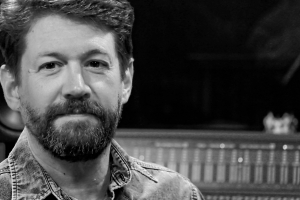 Harvey & Luella is the debut release by Nashville based singer/songwriter Brent Ronen. It’s filled with songs with a broad range of subjects. From gossip in small towns to promising something he knows he can’t deliver (the moon). Ronen takes the listener on a personalized trip through his sometimes quirky, sometimes quite serious world. There are songs of love, songs of loss and even a song about his grandpa falling off the house.

For over two and a half years, Brent has labored in his home studio, and with the exception of a few special guests on piano, steel guitar, bass and organ has completely produced this cd by himself. “It was important to me to be an artist first and take the time to do it the way I wanted.” Ronen says, “I really like being involved in every part of the process.”

Brent is originally from a small town in central Kansas. He learned to sing in the cab of a tractor while working on his Grandpa’s farm and learned to play guitar from his Uncle Dennis who himself had a band. He played for several years around Kansas as Brent Ronen & The Always Near Band.

After receiving some attention from MCA records, Brent decided to move to Nashville to be able to focus on his music career. He worked to hone his songwriting skills as well as performance and production in his own studio.

Attention from Sony Records came next, but by that time, Ronen had realized that his dream was to put music out himself. On his own terms. In his own time. That was the beginning of the project that would end up as the CD entitled Harvey & Luella.

Ronen thinks that in this day and age, it is possible for anyone to break through. You don’t have to have a major label behind you to be successful. Talent is still a prerequisite and if you find your audience, anything is possible.