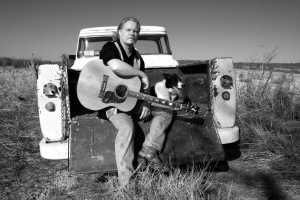 Award winning singer-songwriter, Steve Power, has been described as, “Dave Edmunds meets The Fabulous Thunderbirds on the way to see Led Zeppelin.” Steve’s voice and song writing have also been likened to artists from Raul Malo to Tom Waits, and Joe Ely and received acclaim from everyone from Billy Joe Shaver to Elwood Blues.
The Austin Chronicles runs an Americana gamut from the ironically titled radio favorite Nothin On The Radio, to the Tex-Mex Borderline Bar, on to the down in the alley blues of Hurtville, with a taste of Louisiana by way of the UK and a contender for the world’s longest song title, There’s a Guy Works Down the Truck Stop Swears He’s Elvis.
The Austin Chronicles brings Steve together with an outstanding core band of Pete “The Beat” Langhans (Mother Truckers), Phil Hurley, Jeff Hays and Ron D’Argenio along with special guests, and Austin legends, Carolyn Wonderland, Warren Hood, Ponty Bone, Casper Rawls, Earl Poole Ball (Johnny Cash), and David Miller (Asleep at the Wheel), all gathering at South Austin’s historic Cedar Creek Recording Studio, home of the 1973 Neve console formerly installed at Graceland and used on Elvis Presley’s last three albums.
“Rock and roll, a two step, or a love song, whatever kills your pain. The Austin Chronicles is Austin to the bone,” says Steve. “They just let me put my name on it.” Steve’s name is in fact on 7 of the 8 new songs and 3 of the 4 bonus tracks including the last known recording of Austin icon, Jesse “Guitar” Taylor.
Steve Power has been entertaining since his childhood in California where he sang duets with his mother for tips in San Diego restaurants. Since then he has: Criss-crossed the United States, hitching from coast to coast and border to border; played harmonica with John Lee Hooker; sung with Joe Cocker; stood as onstage bodyguard to Little Richard; played brothels, bars, and stadiums; survived attempted shootings, car wrecks and various governments, and told more stories that Scherazade without once ever letting the truth get in the way.