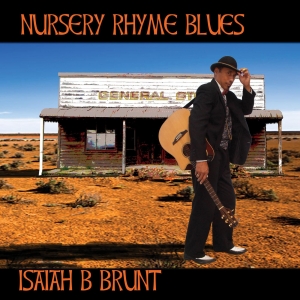 New Album " Nursery Rhyme Blues"
Isaiah B Brunt's new debut album "Nursery Rhyme Blues"
is another notch up from his first self titled EP in 2011. This acoustic rich album boasts some truly original colors of sound with hints of Morricone styled textures.
Only a blues-man when given an old three string ukulele (that had been laying around a garage with old strings) would even venture in the direction of recording a track, matched with a sousaphone and tap dancer about Beale Street. Who would think of telling a story about the silver screen goddess Marilyn Monroe, or consider the prospect of turning childhood memories of fabled nursery rhymes into darkened blues tales.
There is an evenness and balance between songs flowing from story to story all the more making that intimate connection with the introspective soul.
"Just a Beautiful Thing" has a smattering of Hokum about it whilst keeping a traditional Delta blues rhythm.
Isaiah uses a slide on a Dobro ukulele in "Beale Street" and "That Place on the Road", sounding like a cross between a mandolin and a banjo which expresses the authentic nature of his music perfectly.
Each song is crafted differently and has been textured with additional instruments and organic sounds such as cello, sousaphone, flute, accordion, harmonica, birds, thunder, rain and tap dancer to name but a few.

Blues Festival E Guide Volume 6/Issue 51
For decades Isaiah has been a top Aussie production guy and studio owner who's worked with Julio Iglesias and his orchestra, the Goo Goo Dolls and rehearsed American Idol's Randy Jackson and his band for their Australian touring. Not only has Isaiah been behind the board for globally upper echelon bands, he's been a go-to sideman for bands touring down under like the time he hit the road in Sydney aiding Keanu Reeves band Dog Star.

All the while he was working with synthetic and packaged music, Isaiah always knew where his heart lay. The same place it was when he first heard his father strum the Ukulele, blow harmonica and unleash the lap steel.