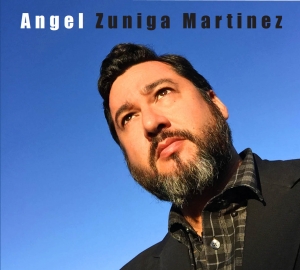 "Before I moved to San Antonio, I had the opportunity to connect with Freddy's surviving spouse, Vangie Huerta, and learn the history of the song 'Wasted Days'…the story motivated me to write a hopeful third verse and give it a beat…and as a proud Tejano and Latino, I also feel a pull to support Freddy's induction into the Country Music Hall of Fame," said Angel Zuniga Martinez.

Fender, born Baldemar Huerta in San Benito, Texas, is credited with being the first American Hispanic Rock and Roll artist in Anglo Latino Music History. The multi Grammy award winning artist was also the first Mexican-American artist to crossover into mainstream pop and country music, and with introducing Tex-Mex music into the American and World music scene. Fender died on a Saturday in Corpus Christi on October 14, 2006, with a desire to the first Latino to be inducted into the Country Music Hall of Fame.

"When my boyfriend and I first heard Angel Zuniga Martinez mixes on Soundcloud, we were like, 'that's totally legit'…We would not have guessed this came out of SA. San Antonio won't expect this sound. It gave me that same vibe as the Red Hot Chili Peppers…and, the lyrics have meaning. You have to dissect them 'cause they're not that simple…they have depth," said Chavez, recent UTSA graduate and backup vocalist on the album.

Martinez departed a Knoxville based Brit Powerpop outfit, Angel and the Love mongers, of some accomplishment, starting anew. The Lovemongers were set to embark on an East Coast tour after their appearance at the 2007 Bonnaroo Music Festival helped them crack the CMJ top 200 with their 2007 release The Humanist Queen, produced by Easter, the former Let's Active frontman who produced R.E.M. records in the early '80s. Angel, a Texas A&M graduate and fifth generation Tejano from Brownsville, Texas, moved from Tennessee to San Antonio end of 2011 to pursue a communications career. The songwriting and music was rebirthed in SA.

AZM launched a Kickstarter project on June 9th to help support some of the cost of the new album and the music video for the first single, "Wasted Days and Wasted Nights". To support, visit the project URL:

Robert Jericho Recording is a Protools powered digital recording and audio production studio in North Central San Antonio, Texas. Founded in 2014 by talented singer/songwriter/guitarist, Robert Jericho, the studio's' focus is on offering high quality yet affordable sound engineering and music production direction to a musical project in any genre for the independent artist. For more information, visit www.robertjericho.com.

KNOXVILLE — Angel Zuniga Martinez is all about the love.
His new act Angel Zuniga Martinez and the Lovers (not to be confused with previous affiliation Angel and the Love Mongers) focuses on a different kind of love than his former work. While the initial question of subject matter draws a dismissive "sex" reply, further delving reveals the material to be much more complex. Feeling the hardship of a struggling economy, Martinez has gathered a crew to deliver the blues he feels.
Sustaining blows both financial and emotional in nature, Martinez has reverted to his roots, which are bluesy, having grown musically out of a Texas blues-bar background, and spiritual, raised somewhere between Christianity and mysticism. Both blues and a spiritual sense of love are the defining characteristics of the new group's music.
"With Angel and the Lovemongers, the whole love thing came about because the drummer I was with pointed out that the songs I write are mostly about love," Martinez says. "That's what the whole 'Lovemongers' thing was birthed out of. I write what I know and use experiences, so that seems to be a theme. I started thinking about a truer form of that. I'm a spiritual person, and I don't play with tarot cards, but the tarot card dealing with relationships is called 'the lovers,' so that's where this one came from.
"I don't like the word, but I'm still a Christian. I have a God-centered world view and although I have this tainted spirituality I've struggled with - I've railed against organized religion in some past projects - but I think community is really important and spirituality is really important, and if it doesn't come from the church, it's got to come from the community or from artistry. I look at the commercial music and artistry that's out there, and there's great art but there's got to be still some faith-based stuff out there that moves people, makes people cry, and that's what I'm moving toward."
While Martinez' songwriting progresses to encompass a bigger connotation of love, it is regressing chronologically. Martinez and drummer Tony Karnowski point out that AZM and the Lovers has more of a '70s mentality regarding authenticity, whereas his previous lineup is noted as New-Wave, '80s British power pop.
With a soulful sound bolstered by the backing vocals of Amy Colemen, The Lovers hope to bring an emotional vibe to their performances as well as their recordings. For music they will begin recording in early January, the group hopes to eliminate the stagnant sound that comes from excessive retakes.
"I feel like I modified my voice more to fit the whole British melodic 80's new wave, and now I'm pulling back to some of my roots," says Martinez. "When we get into the studio, I really want to get towards that live vibe and away from the overdubs. If you make a mistake you capture it - as long as that spiritual emotion is there."
Karnowski adds, "It's the connection more than anything else. I think we're trying to promote the idea to be in people's faces in a good way and press the flesh, talk and be present around each other."
Martinez is recognized for his love of the community already. After hosting numerous benefits to aid awareness for various cultural communities over the years, he is now taking a more direct approach with the music itself.
"I guess it's all about that whole John Lennon 'all we need is love' love-centered revolution," Martinez says. "We all have that connectivity, that want and need to feel loved and appreciated whether it's from one another or from God. You can't just beat people over the head with a bible. It's not my place to save the world; it's not anybody's place. Who are we to judge? I think music and love - and when I say sex, it's really more about the passion - you can translate that away from a relationship and toward the community. That's what I feel my heart and soul pulling me toward."