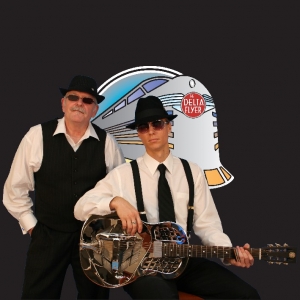 Like a spring breeze that refreshes everything in its path, Stevie DuPree and the Delta Flyers bring their soulful blues derived from its primal sources in New Orleans, Chicago and especially Mississippi. They avoid flash and bombast in favor of the elusive essence of the music that can only come from the deepest commitment. As consummate pros, however, they sacrifice neither intensity nor excitement in the process, instead delivering a uniquely moving experience instrumentally and on Sixteen Bars.

Lead vocalist and “Mississippi saxophone” player Stevie DuPree was born in Houston, Texas in 1946. Seeing the Paul Butterfield Band at the Fillmore West and discovering Muddy Waters in the early sixties had a profound effect on him, setting him off on a long, productive career interrupted by a 20-year hiatus to help raise his children. He has recorded five acclaimed albums since returning in 2003.

Sixteen Bars contains 10 original compositions, seven of which were co-written with extraordinary guitarist Travis Stephenson. They encompass an impressive range of rural blues and country styles supported by Jack Saunders (doghouse bass, guitar, percussion, backing vocals), Rick Richards (drums), Rich DelGrosso (mandolin) and Sister Tommie Lee Bradley (backing vocals). “61 Highway Blues” starts the backyard party off right with a raspy Elmore James-type electric slide guitar shuffle powered by Stephenson and driven by DuPree’s expressive tenor exhorting, “That 61 Highway sure can be a mean old road.” The jaunty country two-beat of “Sixteen Bars” is not about gin mills or the length of a blues progression, but the kind of bars in a jail door. Not letting up on the knee-slapping good time energy, “Mentone, Alabama” features tight harmony vocals worthy of bluegrass music as the resophonic guitars churn and DuPree narrates an inviting road trip.

The boogie shuffling “Baby’s So Fine” injects an element of humor often found lacking in contemporary blues as DuPree sings, “Got me a great big bulldog, y’all” and his band responds, “Bow wow, bow wow.” A tasty harmonicist in the Sonny Boy Williamson II mold, DuPree also contributes two reed-tickling solos. “Sunflower River Rag” is a stunning, foot tapping duet between DuPree singing and blowing harp, and Stephenson carrying the weight of the song with his perfectly-picked acoustic resophonic guitar (and stomping “porchboard”). The country gospel backing harmonies take the listener to church with, “Whoa, the river’s going to wash me down.”

“Poison Took My Baby” is a cautionary tale about substance abuse and a change of pace musically as well with its somber minor key progression. “Dockery Farm” pays tribute to the famous Delta plantation steeped in blues lore while sporting a hypnotic, twangy hill country groove that will not quit. The hard charging Chicago blues shuffle “Fishin’ Little Mama” introduces a metaphor not often heard in the blues as DuPree sings in one of the dynamic stop-time verses, “ Well she ketch a mess ‘o flounder, Lord, and I cleans em up, my baby lets me drink from her lovin’ cup.” “Baby Jane” is a chugging two-beat hoe down with stop-time featuring DuPree’s harp “quacking” over the locomotive drumming of Richards. Closing out the secular prayer meeting is the laid back, loose-limbed country honk of “I Got to Testify” with a rowdy group known as the “Fabulous Inebriators” joining DuPree on the raucous choruses.

Stevie DuPree is a veritable musical force of nature with five more albums either recorded or studio ready. If past performance is any indication of future results, fans of soul shaking blues will be amply rewarded.