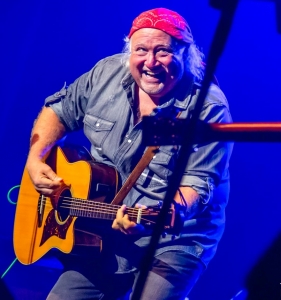 The New York Times hailed Pat Guadagno's performance as “A musical journey ... an always unpredictable ride".
The self-proclaimed Saloon Singer, who, according to Acoustic Guitar World, "would sooner re-shape an old song than bring a new one into the world", won world-wide acclaim when his music was featured in the award winning Showtime Series CALIFORNICATION.
Deeply rooted, but not mired in the Jersey Shore music scene, Guadagno’s 5th album, New Jersey Material, features a collaboration with Grammy Award winner Keb’ Mo’ along with songs by some of the Garden States foremost, and lesser known Songwriters. Pat’s unique interpretations of other people’s art are evident in his recordings as well as onstage where he creates reverent, theatrical tributes to artists like Van Morrison (A Marvelous Night) Tom Waits (The Heart of Saturday Night )and Bob Dylan (BobFest).
Guadagno has shared the stage with such diverse legends as Stevie Ray Vaughn, Peter Paul & Mary, BB King, Tanya Tucker, the Mavericks and Jorma Kaukenan (none of whom were aware of his presence). Guadagno headlines events across North America from the Toronto Film Festival to the International Guitar festival in Zihuatanejo Mexico, conveniently scheduling winter performances below the 25th parallel, entertaining audiences and annoying golfers while attempting to break 100 and the dress code at the finest Golf Courses in the world.
0
What's This
Advertisement