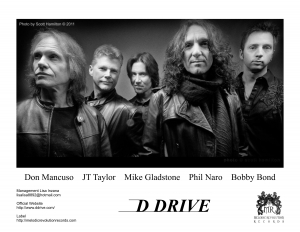 Released in 2005, the first D Drive CD received critical acclaim and airplay in the US, Australia, and Europe. The band’s signature sound blends strong classic rock roots with a modern edge sound all its own. The first D Drive CD did so well that Mancuso and Naro decided to put together the band’s second release in 2007 entitled "Straight Up The Middle." The new album has received accolades from a rapidly growing legion of D Drive fans, and is in its second pressing. D Drive released a video in summer '08,

3D is the long awaited follow up to “Straight Up The Middle” (2007) and promises to be an album that will be enjoyed for generations to come. 3D has great significance as well, not only as our 3rd release but the CD ise housed in a special edition 3D cover with 3D Glasses and 11 new rocking tracks.