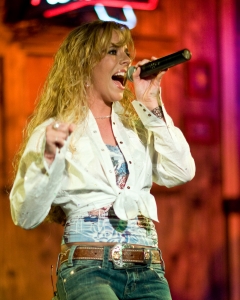 Susan Hickman has found her niche in a blend of rocking, uplifting country that hints at a range of influences from Janis Joplin to Carrie Underwood. Passion is evident from the very first note, and her considerable talent allows her to segue from whisper-quiet reflections to barn-burnin' romps with ease. Hickman's in control and loving it – and she proves it on her debut country CD, SUSAN HICKMAN.

With her new CD, Susan is not only sharing her love of music - she's hoping to connect with a global audience. "I really identify with the songs on this project," Susan says from her home in Atascocita, Texas. "And I think that a lot of other folks will, too."

"Red" is a dark tale of jealousy and rage, while the two-steppin' fun-loving, "Wrapped Up In Me" offers a light-hearted change of pace. The contemporary ballad "Hell Still Ain't Frozen Over" works well with Susan's favorite, the poignant "One Of Those Who Make It Up There." Closing the disc is Hickman's soulful take on Gregg Allman's classic southern rocker, "Whipping Post."

The 24-year old beauty is not without credentials; over the past few years she has shared the stage with high-profile acts like Tracy Byrd, Jo Dee Messina, Kevin Fowler, Steve Holy, The Lost Trailers and Phil Vassar, to name a few. Her live shows are energetic, and she’s developed quite a following in her home state. “I love performing,” Susan says admits. “When you can feel the audience’s energy, you know you’re doing your job.”

Music has always been a part of the feisty blonde’s life story; she started taking piano lessons when she was just five years old and added the violin in her teens. Just four years ago she began to teach herself guitar. "Yes, I'm blessed to come from a very musical family," she laughs. "We were always singing and playing; our family reunions are just awesome."

Susan grew up singing in the church choir, listening to her parents’ favorite classic rock songs, and hearing her mom sing opera around the house. Her mother often made up songs to get her two daughters motivated. “There was literally a song for everything,” Susan recalls. “Gonna clean house today? Yep, she had just the song to put you in the mood.”

That musical backdrop helped drive the Texan’s love of song, and according to her parents, the exposure began when Susan was still in the cradle. Family legend tells us that Hickman was actually singing before she started talking. "Crazy, right?" Susan laughs. "Well, some things never change."

Another thing that hasn't changed is this songbird’s precociousness. When she was just 12-years old, Susan cold-called a talent agency and scheduled an audition. Why? "My mom told me I'd have to convince her that I was sure I wanted a career in music before she'd let me pursue it,” Susan recalls. “Making that call was my way of showing her that I was serious. She's been behind me every step of the way, ever since."

While that first phone call didn't lead to instant stardom, it did give Hickman an insider's look at the industry - and helped prepare her for the work ahead. Her life, she says, has been focused on a career in entertaining ever since.

Susan is the human equivalent of a perpetual motion “machine” - and she now divides her time between live performances, songwriting, rehearsals and her web design work. “I’m always busy,” Susan confides with a laugh. “But I’m also pretty much happy all the time. I promised myself that my ‘job’ would be something I loved. Music is it.”

Another promise the aspiring star made was to never compromise herself or her music. “I’ve always said that if I tell you something, it’s the truth. For me, if it’s even possible, when I sing something - it’s even truer,” Susan states. Her moral compass leads her in everything from song choices to venue selections – and she is steadfast in her beliefs.

While Hickman was raised in Houston, her childhood years were imbued with a “small town” feel. “My little sister was – and is – my closest friend,” Hickman states. The two shared a childhood filled with secret, homemade slip ‘n slide adventures (indoors no less) and late night television marathons watching old westerns. It was an idyllic life in many ways, and one that Hickman is determined to emulate.
Introduced to her husband Matt by a mutual friend four years ago, Susan is on the fast-track to happiness. Kids?

"Yeah, someday," she says with a smile. In the meantime, she's performing every chance she gets. "I love the energy of the crowd," says Susan. "It's really powerful when the audience relates to you and your music."

This young artist is driven to make those connections. Combine her talent with that passion - and you have the magic that is Susan Hickman.