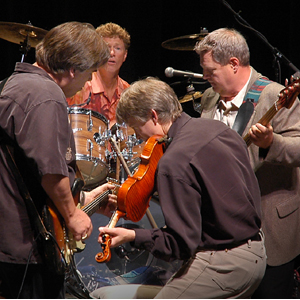 The Red Willow Band existed in South Dakota from 1974 to 1982. (Still exists, we guess, we play once or twice a year these days.) Their business card read "Red Willow Band.....the best in country swing".

Two albums and several singles were recorded and released, with one single "I Wish I Had Your Arms Around Me" reaching #97 on the Billboard Hot Country 100 charts for a whopping 7 days. The band made numerous TV specials for South Dakota Public Television, hosted the successful NEMO series of outdoor festivals, and toured nonstop in the upper U.S. from Washington State to New York City.

See you at the gig!!