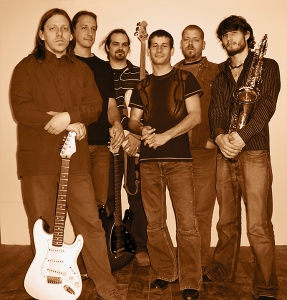 T. ROGERS is a hell of a joyful 6 pieces blues band from Hungary.
Allright, but who's T.Rogers ? The leader of the band ? How come he doesn't bear a Hungarian name then ?
Well, there is a little trick about this very name. Yes, it's true, T. Rogers does sound anglo. Ferenc Kovács, who happens to be the actual leader of the band, sings in English. So our Hungarian musicians figured they needed an English, "americanish" name for the band. Now, in Hungary as in most countries of westerner culture, there are 2 kinds of
artists : the stars, who are adored by the crowds, those the people worship when they watch them on TV or hear them on the radio. And then there are the others. Those who are NOT world known stars. And in our westerner culture, in such a case, most people will translate "artist" to "bum". Tramp. Good for nothing. People without a care in the world. And how do you call people without
a care in the world in Hungarian ? Troger. That's right. Troger is the Hungarian word for it. So there you go, here's T.Rogers.
Yes, but who in the world is T. Rogers ?

T. Rogers started in 1999. Despite the average age in the band being 25, each musician has at least 13 years of musical experience under their belt. The
mixture of familiarity between players that have played together for 11 years and flare brought on by newer members makes T. Rogers a tight, engaging and exciting band that mostly plays electric blues. So today T. Rogers is based in Budapest, Hungary, and has a regular gigging schedule in pubs and clubs around the city. The founders of a new sound that could be called 'Joy and Blues', they are attempting to spread this easy going, captivating yet contradictory music to the masses. Or whoever wants to listen to it....

Since the 2006 release of their CD 'Driven By The Blues' that has been aired by blues radio shows in the Netherlands, Belgium, Luxemburg, Denmark, France, Estonia, Argentina, Portugal and Hungary, they added blues festivals and clubs around Europe including the Gouvy Jazz & Blues Festival in Belgium, Augustibluus Bluesfest in Estonia and the Luxembourg Blues & Jazz Rallye to their usual schedule, to the enjoyment of many Europeans
music lovers known as some of the most serious blues fans today.
The success they meet everytime they perform somewhere proves they are not tramps anymore.
Since 2006 the band is working with the Bluebridge Network artist agency. During the summer of 2007 they recorded their new album titled: Wear Your Soul, which became a CD at the end of the year. However Miki Tóth left the band at the end of 2006 he is playing on the new record, along with Krisztián Magi another old friend, on hammond.
Wear Your Soul has been aired in many countries and radio stations, the band was playing it live across Europe. In April 2008 one of the new songs "Goin' Home Train" made it to the finals of the International Songwriting Competition and "Liftin' Walk" was also selected in the semi-finals.
In May and June the band was backing the legendary Louisiana blues man Mem Shannon on his European tour.
T. Rogers is now on its way to a European recognition, hopefully leading to an even larger one soon.