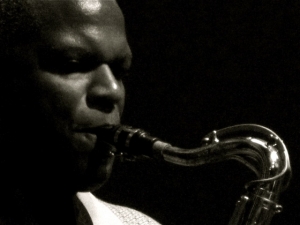 ORIGINAL WORKS OF ART, the debut album from tenor saxophonist Art Grider, is best described in one word - BLUESIFUSIFUNKABOSSABALLADACIOUS!! All of the songs on this album are original compositions and reflect the nature of Art and his group, funky yet firmly rooted in postbop to fusion jazz styles.

[REVIEW BY MICHAEL ANDREWS OF "THE FLAGPOLE", FROM ATHENS, GA - "Local sax man Art Grider honks, wheezes and wails all over this, his cheekily-titled debut album, while an enlisted band of locals brings up the rear. Grider specializes in what could be referred to as extremely funky jazz fusion that calls upon the spirits of influential biggies like Stan Getz, John Coltrane and Ornette Coleman.

Grider, also familiar as a longtime UGA biochem professor, has been making music for some time, mostly with church bands and occasional sit-ins with local groups. Original Works of Art shows the man also knows his abstract jazz and tightly-wound funk like big carbon knows the two little oxygens, gloriously extended notes and all."]

Personnel:
Art Grider plays tenor sax, and has enjoyed playing in across the USA in various church bands. He has performed in the Athens, GA area at Emmanuel College in Royston, Georgia, the University of Georgia in Athens, Georgia, the Blue Sky Concert Series on College Square, a featured artist at Borders Bookstore along with ZamarAthens band, and at FARM 255 Restaurant and Bar. His major musical influences are Stan Getz, Joe Henderson, Dexter Gordon, Charlie Parker, and John Coltrane. Art is also a Professor of Nutritional Biochemistry and enjoys using his music as inspiration for his biochemical research.

Greg Clinton plays guitar and flute on this album, and released an album in 2002, Essays and Contemplations. Art had the pleasure of being featured on the third track, Interplanetary Jam.

Tracy Reynolds plays keyboard/piano. he is an instructor at Emmanuel College and is the music minister for Grace Fellowship church.

Chris Hood plays drums on this album, and is the drummer for the Southern hip-hop group REHAB. He is the featured drummer on several albums, including Colors of Worship (Amy Fatzinger), Paper Crowns (Amy's Confession), Graffiti to the World (REHAB), Essays and Contemplations (track 1)

Michael Westbrook, currently enrolled at Georgia State University majoring in Jazz Studies, also plays guitar on track 2 which he wrote. He is the lead guitarist on the album, The Roar of Beckoning (Oracle).

Pat Strawser, besides helping produce the album, plays piano/keyboards on track 9, which he wrote, and Hammond organ on tracks 2, 4, and 9. Pat also released the album, Uncertainty Principle, with Volare in 1997.
---