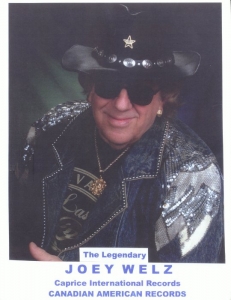 MITCHELL and the BARKEYS. His bio was featured in the INTERNATIONAL MUSICIAN MAGAZINE of the A. F. of M. and ROLLING STONE named him one of the top 100 IMMORTALS OF ROCK & ROLL. KEEP ROCKIN' Magazine just did a feature story on him in their December Issue...

Joey tours France every year with the CAPTAIN JOE COMBO and has released 2 new albums with his French Band; “REWIND MY ROCK & ROLL” & “ROCK & ROLL YEARS”. He will tour France with the CAPTAIN JOE COMBO in January of 2011, during MIDEM and July,2010. He also reunited with his old friend AL RAPPA and is playing selected dates with BILL HALEY'S COMETS. PBS has invited him to bring the COMETS to Pittsburgh to tape a segment on “MY MUSIC”, The legends of Rock and Roll, which will be seen by 11 Million viewers world wide this summer, 2010. He will join his old COMET Buddy, leader AL RAPPA, and Sing “SHAKE, RATTLE AND ROLL” and “ROCK AROUND THE CLOCK”... He has recently opened his HOME OF A COMET as the ROCK AROUND THE CLOCK MUSEUM. He co-wrote the revised version of “ROCK AROUND THE CLOCK with JIMMY DeKNIGHT. To celebrate Joey's 50th Anniversary, CAN-AM has released 4 new Radio Singles written by Joey in today's
radio formats: “FOREVER TIL ETERNITY” “STIMULATE MY HEART” & “THE TWITTER”, in the A.C./ POP Formats, & “SMILIN' EYES” in todays COUNTRY MUSIC Format: Joey's new single PLUG THAT HOLE is earmarked for the Gulf Coast oil spill clean-up relief fund. View the video at www.joeywelz.com/video.htm. New Albums; “LOVE MAKES THE WORLD GO ROUND” & “THE POWER AND THE GLORY, featuring the singles; “I AM NOW”, “ROCKABILLY SATURDAY NITE”, with the PAUL BLISSETT BAND from Canada and “TODAY IS YESTERDAY'S TOMORROW, are available worldwide through www.theorchard.com & www.cdbaby.com . Send Playlists to C.A.R.BOX-808-Lititz,Pa.17543/ For Interviews-717-627-4800. Check out Joey's Website at www.joeywelz.com & canadianamerican@dejazzd.com

THE LEGENDARY JOEY WELZ
Joey Welz is world famous as the featured pianist/vocalist with BILL HALEY'S COMETS(MCA),And has been a singer/songwriter and recording artist for over 5 decades starting with his 50s hits on BAT RECORDS "BOPPIN'THE STROLL and "THE MYSTERY OF LOVE. HE RECORCED TOP 100 HITS IN THE 60S WITH "HEY LITTLE MOOMBEAM" "RHAPSODY FOR A SUMMER NIGHT" and many more. He is making new RADIO FRIENDLY MUSIC IN THE 21ST CENTURY FOR CANADIAN AMERICAN RECORDS which he owns. .He has recorded 75 45s and 60 Albums and is A GOLD CHARTER MEMBER OF THE ROCK AND ROLL HALLL OF FAME and the ROCKABILLY HALLY OF FAME. VISIT HIS WEBSITE for BIO Info www.joeywelz.com