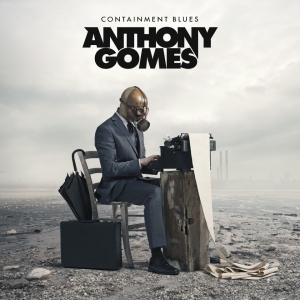 Your Mama raised you right. You know better. You shouldn't. Your head says no but your heart says go. You just can't resist and now you are in love with the wrong kind of person. "Like a match to gasoline, she lit me up and I'm burning on fire. Mama warned me about her and now I know Mama ain't no liar." This ZZ Top/John Lee Hooker on steroids boogie features a fat guitar groove that is just plain nasty.

Everyone has been in a bad relationship. Somebody does somebody wrong and there's no escaping the blues. In this true to life tale, the cheating partner believes that she is being 'so undercover' with her deception. But she's not as clever as she thinks. He's known all along. In fact, Hell and half of Georgia know she's doing him wrong. This story is put to a sticky must dance groove that echoes the blues rock strut of classic 70s bands like the Faces, T-Rex and the Rolling Stones. Have mercy!

A broken heart hurts like hell. When it keeps taking blows without a chance to heal the pain feels terminal. The song is portrayed as a relationship song between a couple. The emotion behind the song is actually inspired by my mother's lifelong battle with mental illness. It is so hard to see someone trying to fight to survive their delusions. When I was growing up every few months she would be admitted to the hospital. It was heartbreaking for a 12 year old and I dreaded going to the hospital to see her on heavy medication. It was like she was somewhere or someone else. "You keep on looking at me with those far away eyes and you say, you say we tried."

My Grandfather was my first superhero. I would spend the summers with him in Quebec City. He would take me to the Plains of Abraham, hold my hand tightly, and tell me stories about life. My Grandfather's world was so different from ours today but those lessons still resonate. "Never judge a person unless you walk a mile in their shoes," he said, "And, the road to redemption is paved with a little blues."

When it comes to love, talk is cheap. You have to deliver the goods. The love interest in this story is willing to practice what they preach but it comes stock filled with exceptions and conditions. "She said she'd walk a mile for me but she ain't got no shoes, sing me a love song but the girl would rather cry the blues." This is a real blues groover with some exceptional harmonica from a South American musician. The blues is a worldwide phenomenon.

This song is a lesson in letting go. Especially in these times. There is so much uncertainty. How am I going to pay my bills? What is there so much division in our world? Why can't we all have basic human rights? What is happening to the environment and our planet? Never give up but sometimes it takes courage to have faith that things will all work out for the best. "I'm gonna let money take care of money, gonna let the bees take care of the honey, gonna let the angels sing up above, gonna let love take care of love."

Enough is enough. Do I really need to say more? This is a downright nasty delta blues groover with an important message. It's a sonic punch to the kisser that's aimed at those who treat women with no respect. "Your Mama changed your diapers because she thought you were precious. Stop calling women hoes and bitches." It's time to stop the cycle.

This was written for one of my best friends who lost his wife too early in life. It's a love song that moves beyond space and time. The love these two people share is eternal. They were together before the beginning and they will be together after the end. Here or in the hereafter their love will bring them together time after time after time.

Is it the end of the world? It sure feels like it sometimes. How are future generations going to look at us today? It's hard to know what is true these days. Opinions are not facts but no one seems to be held accountable. We need somebody to tell us without bias. We need to get our faces out of our smartphones and take a look at what's going on.

Some have it all but want more because they don't know what they're searching for. There is nothing more precious than the greatest 4 letter word. The Beatles sang about it and we are still singing about it today because the message needs to be heard. One voice, one guitar, one cello and the message is loud and clear. L-O-V-E..

This is a tale of dealing with 2020 and having your mother in law move in. With all the stress of these crazy times a little laughter goes a long way. "Ain't no fighting it or putting up resistance, I really wish my mother-in-law would practice some social distance". I apologize to all the mother in laws out there but it's all in good clean fun!

Anthony Gomes, #1 Billboard Blues Artist, is a triple threat force as a guitarist, vocalist and songwriter. This, along with his high-energy shows and dynamic stage presence, make him one of the top draws on the Rock/Blues circuit today.

Gomes’ new record Peace, Love & Loud Guitars, named Best Blues Album of 2018 by Blues Rock Review and SoundGuardian Magazine, is the culmination of a life spent honoring Blues traditions while never losing sight of his own identity. The Toronto born guitar slinger stands his ground as a creative artist, not a derivative history lesson, and is eager to push the Blues back into the mainstream.

“My goal is to keep the Blues fresh, exciting and even dangerous," says Gomes. "I want to bring back the thrill longtime Bluesmen created in their day. At the same time, I think it’s very important for the music to grow and evolve.”

He has performed with the likes of B.B. King, Buddy Guy, Robert Plant, Heart, Sammy Hagar, Joe Bonamassa, .38 Special, Jonny Lang, Robert Cray and Kenny Wayne Shepherd. Gomes recalled a conversation he had years ago with one of those legends. “B.B. King told me the Blues are like the laws of the land. They need to be amended to the times we live in,” Gomes said. “As an artist, it's very exciting to think that the Blues can be just as ground-breaking today as it ever was."

Not content to only contribute to the Blues as a musician, Gomes is also an award-winning scholar of Blues history. He earned the University of Toronto’s C.P. Stacey Prize for the highest overall GPA by a history student, completed his Master’s Degree thesis on the racial and cultural evolution of Blues music, and graduated with high distinction. His thesis, The Black and White of Blues, was published in 2014 and was nominated for Best Blues Book of the Year by Blues 411.

Believing that music can inspire the human spirit, Anthony founded the Music Is the Medicine Foundation in 2010. This non-profit organization is dedicated to changing the lives of others through the healing power of music. Through private donations and winning sizable grants from State Farm Insurance and CVS Pharmacy, the foundation has funded songwriting scholarships, offered music education programs, and donated musical instruments to those in need. Most recently, MITM partnered with Montreal General to bring a "first of its kind" music therapy studio to a Canadian hospital setting bringing light and hope to those in their darkest hour. Without passion there is no music.

Anthony Gomes has nothing left to prove while leaving all his passion on the table. Nonetheless, he continues striving to not only find the legendary “lost chord,” but the ultimate combinations of words, notes and performance. Looking for an actual 21st Century guitar hero? Here he is.

You can get a free album download featuring his hit song "Come Down" and other hit songs from throughout his career at: www.FreeGomesAlbum.com
24
What's This
Advertisement