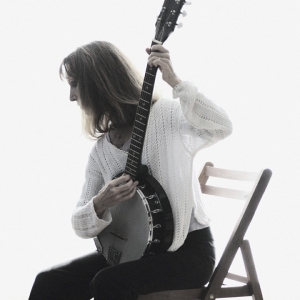 A lifetime’s dedication to her art has made Annie Gallup an icon among people who take songwriting seriously. Unabashedly imaginative and sensual, her elaborate song-length works of fiction crackle with wordplay and pulse with insistent rhythm. Borrowing forms from ancient folk tales to modern poetry, Annie sings over her bluesy guitar figures as if sharing secrets. Not many songwriters take the kinds of risks that Annie does, and barely any can pull them off with such deft, startling mastery.
Annie grew up in Ann Arbor, Michigan, daughter of a printmaker and a woodworker. She studied dance as a child — dancing and performing came to her naturally — but music, country blues in particular, was her secret obsession. As she taught herself to play guitar (hiding in her room after school, copping licks from old Mississippi John Hurt, Doc Watson and Dave Van Ronk albums that she found at the public library) it never occurred to her NOT to write songs for herself to play. So by the time she began performing publicly in the early 90s (after attending the University of Michigan School of Art and then moving west to chase her incurable wanderlust) she had internalized a songwriting style that was very distinctively her own, and that had evolved from her fascination with country blues, her love of words (Alice Munro, Grace Paley, Margaret Atwood, Stephen Dobyns), a dancer’s sense of rhythm, and the sort of playful inventiveness that comes from doing something purely for its own reward.

Please visit the AirPlay Direct release of Hat Check Girl's CDs, Goodbye Butterfield and at 2 in the morning,
Annie Gallup's Ghost, and
Peter Gallway's Muscle and Bone and
Hello Stranger.
18
What's This
Advertisement