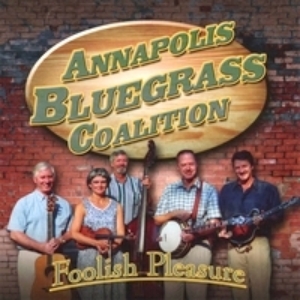 Annapolis Bluegrass plays to enthusiastic audiences where ever they go. For good old fashion family fun you just can't beat The Annapolis Bluegrass Coalition. They will fiddle the clouds away and douse the day with sunshine and good old fashion bluegrass music. Their combination of electrifying picking, soulful singing, eclectic arrangements and original songs are sure to get your hands to clappin', knees to slappin', and toes to tappin'.

Roger Green is the guitar player and de facto leader of the Annapolis Bluegrass Coalition. He sings lead and harmony vocals and writes many of the bands original compositions. Roger has been playing bluegrass since the late 50’s and grew up as possibly the biggest Don Reno & Red Smiley fan ever. Starting off as a banjo player, Roger switched to mandolin which he played for 20 years. He worked with Cliff Waldren, Bill Emerson and the New Shades of Grass until a tour of duty with Air Force. After returning home, Roger played mandolin in several Washington DC area bands including Destination Bluegrass, None of the Above, and Ritchie Reunion. In the mid ‘90s, Roger put together a trio consisting of Tom Gray on bass and Fred Travers on dobro. This trio played “everything they ever wanted to do but weren’t allowed to do in a bluegrass band.” From there Roger continued to play gigs with a pick-up style band called, “Roger and the Real Good Pickers”, drawing from the wealth of talented musicians in the Washington DC area. Weekly casual picking sessions led to the formation of the Annapolis Bluegrass Coalition. For the last 11/2 years Roger has been hosting a bluegrass radio program called the Bluegrassorama on WRYR 97.5 fm which is also streamed on www.wryr.org on Tuesdays & Saturdays.

Dan Kimball is mandolin player and tenor singer with Annapolis Bluegrass. His clear, high voice is a perfect match for the duets that he and Roger do so well. Dan first heard bluegrass music at Watermelon Park in Virginia during one of Carlton Haney’s festivals. Shortly after, he purchased an old ‘A’ model Gibson and joined his first group called, “Mrs. Kimball's Fruits, Nuts and Berries “ named after his mother’s fruit stand in Ashton, Maryland. After his first foray with a band, Dan started playing in the late ‘60s with a band called Rat Grass along with Ratso (currently with Kinky Freeman) and Johnny Castle of “Too Much Fun”. In the 70’s Dan was in a traditional group called Appalachian Reign and later joined a group called Southgate. When that band ended, Dan took a break from music for about 25 years and took over the family produce business. After a lot of coaxing from Roger, Dan came out of musical retirement and joined the newly forming Annapolis Bluegrass Coalition and hasn’t looked back.

Sue (Raines) Tice is fiddler and occasional harmony singer with Annapolis Bluegrass. Originally from Connecticut, she began her musical career in upstate New York where she began developing her fiddle skills with pickers like Tony Trishka, Peter Wernick and Greg Root. Sue was an original member of the “Buffalo Gal’s”, the first all female bluegrass band of the bluegrass revival of the 70’s. She eventually made her way to Annapolis, Maryland where she has made her home. Sue has played fiddle with such notables as Eddie & Martha Addcock, Liz Myer and Don Stover. After taking off a few years to raise four musical children, she is currently enjoying playing music more than ever, both in live settings and as a studio musician.

Bob Tice is the banjo player with Annapolis Bluegrass and occasionally adds a baritone vocal to the mix. He contributes significantly to the hard driving sound that Annapolis Bluegrass is noted for and has a keen sense of originality in his approach to the instrument. Never at a loss for something to play, he knows every banjo “kick off” known to man. Over his 25 years in bluegrass, he is well known as banjo teacher in the Washington DC/ Baltimore areas. Besides Annapolis Bluegrass, he has also played with Bottom Country Grass and Patent Pending.

Jim Duvall rounds out the sound and sets the time for Annapolis Bluegrass with a rock solid acoustic bass. He is the band’s metronome and does a very good job of keeping everyone honest. All though no stranger to music, Annapolis Bluegrass is Jim’s first stint as a bluegrasser and acoustic bass player. His musical background goes back more than thirty years and includes clarinet, electric guitar in a Motown band called Louie & the Uptights, and much more recently electric bass for a top 40s country band called Southern Pride. Jim’s addition to Annapolis Bluegrass provides a new dynamic to the overall sound of the band, by providing a fresh perspective on the traditional songs and innovation for the bands original compositions.

Annapolis Bluegrass Coalition released their first CD, "Foolish Pleasure", in September of 2003. This is a collection of mostly original songs written by Roger Green. It includes traditional bluegrass, a new gospel tune and a terrific new instrumental called "Skip Jackin'" named after the Skipjack, a type of sailing vessel that was used to dredge for oysters in the Chesapeake Bay before power vessels were available. In 2007, Annapolis bluegrass released their second and latest CD entitled “Live At The Prince”. This live performance recording was a direct response to Annapolis Bluegrass fans who have seen their show and requested that some of their stage songs be recorded.
17
What's This
Advertisement